"Bimal Gurung is a democratically elected leader and represents the Gorkha people. This shows the autocratic and dictatorial nature of many TMC leaders which is not acceptable in a democracy or to us." - Neeraj Zimba, GNLF

The Gorkha Janmukti Morcha (GJM) on Saturday got an FIR lodged against Trinamool Congress minister and singer Indranil Sen for “spreading hatred and issuing veiled threats to the GJM leaders”.

The alleged remarks have not gone down well with Trinamool ally Gorkha National Liberation Front (GNLF) either.

Sen, minister of state for information and cultural affairs, allegedly made the remarks at a public meeting held in Darjeeling on Friday.

In his speech, Sen had said that he had brought along with him to Darjeeling “32 steel trunks of six feet in length and ropes”. He said that after the May 14 election, Gurung, Giri and all the GJM candidates should be tied up with rope, put in these trunks and sent to another district.

“The public speech was incendiary, full of hatred and one bound to create tension among the Gorkhas. It also violated the Indian Penal Code and the Model Code of Conduct. Sen’s speech was a direct threat to our president Bimal Gurung, me as well as all 32 of our candidates. I have not only got an FIR lodged but also complained to both the State Election Commission as well as the Election Commission of India,” said GJM general secretary Roshan Giri.

“What does he mean by six-ft trunks? Basically, coffins… The implication is that after the elections, the Trinamool will have us killed. This is a threat. The Trinamool has persistently threatened us with the help of the police, since the state administration is in its pocket,” he added.

“We are winning the elections. Even at the public meeting yesterday, which was also attended by Trinamool MP Abhishek Banerjee, the crowd was brought from rural areas. It was like a panchayat election and not a municipal election. The people of Darjeeling do not like the TMC,” said Giri.

A video recording of the speech has gone viral on social media in the hills, said a local, adding that posters protesting the speech have also come up around the town.

On Saturday, the GJM organised a massive protest march, which ended at the very spot, where Sen had made his speech on Friday.

Local Trinamool leaders said that GJM was twisting the speech into a ‘Gorkha vs outsider’ issue. GNLF spokesperson Neeraj Zimba, however, said: “This is not our political culture. A responsible minister of the government should not talk like this or pass such comments. It is for the people to decide what they want to do. At the end of the day, Bimal Gurung is a democratically elected leader and represents the Gorkha people. This shows the autocratic and dictatorial nature of many TMC leaders, which is not acceptable in a democracy or to us. They have definitely hurt the sentiments of many Gorkhas. The speech does not affect our alliance with the Trinamool, but we will not allow such speeches from any party in the future.”

Darjeeling MP from BJP SS Ahluwalia has condemned Sen’s speech. Calling it incendiary, he said: “Sen has deliberately sought to ignite passions within the Gorkhas and other communities living peacefully in Darjeeling.’’

Despite repeated attempts, Sen could not be contacted.

[Via: Indian Express, pic via: HT] 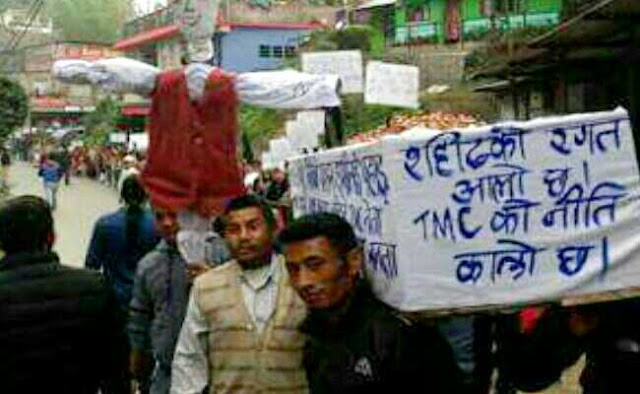