- May 22, 2017
A consortium of experts from India, Italy and Britain have selected Darjeeling-East Sikkim in the eastern Himalayas and Nilgiris in the Western Ghats for studies to develop tools and services aiding early warning systems and improving resilience to landslides in India.
The programme christened 'LANDSLIP' comprises physical scientists, engineers and social scientists from nine organisations in the UK, Italy and India as collaborators in improving the assessment of landslide risk, early warning systems and the preparedness of local communities likely to be affected by landslide hazards in India.
The project consortium of 36 scientists and engineers is co-led by Helen Reeves from the British Geological Survey (BGS) and professor Bruce Malamud from King's College London (KCL).
The other project partners are from the Amrita University, Consiglio Nazionale delle Ricerche (Research Institute for Geo-Hydrological Protection), the Geological Survey of India (GSI), Newcastle University, UK Met Office, Practical Action Consulting India and Practical Action Consulting UK.
This will help to protect lives, livelihood and the local economy of vulnerable landslide-prone communities in India, a project statement said on Friday on the occasion of its formal launch.
The methodologies developed through this project will be replicable to the landslide-prone areas elsewhere in India (e.g. Uttarakhand) and South Asia.
The project has been funded under the UK Natural Environment Research Council (NERC)/Department for International Development (DFID) Science for Humanitarian Emergencies and Resilience (SHEAR) programme.
Helen Reeves, Science Director for Engineering Geology, British Geological Survey said: It will provide new knowledge and information on landslide risk reduction in India and South Asia, supporting India's contribution to the Sendai Framework for Disaster Risk Reduction.
--IANS 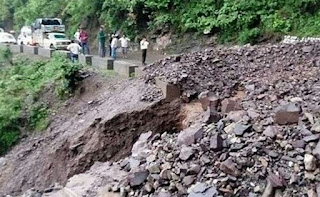