- May 26, 2017
Daily New Jalpaiguri-Darj toy train services from tomorrow
The toy train service linking New Jalpaiguri (NJP) with the 'queen of hills' — that was re-introduced last year after a five-year gap — will turn daily from May 28. So far, the train ran just thrice a week.
The daily ride will help thousands of tourists, who had been flocking to Darjeeling over the last two weeks. According to tourism industry, this summer Darjeeling witnessed thrice the number of tourists than that of 2016 summer, which resulted in a major transport crisis. Almost all hotels are booked till June 7.
"So, the toy train service comes at the right time. It takes a longer time than the road journey, but has its own unique charm. More importantly, it will help tourists reach the Hills without solely depending on taxis," said Raj Basu, a tourism expert who runs Association for Conservation and Tourism (ACT), a body that organizes trips to north Bengal and the Hills.
Maintenance of tracks and rakes has been a major challenge for the Darjeeling Himalayan Railway, which runs the service. This had led to the suspension of the NJP-Darjeeling journey in 2012, following which Unesco declared that it will be struck off the heritage list unless efforts were made to resume the service.
While three rakes are operated for the joy rides, two more will be pressed into service for the NJP-Darjeeling trip. (TOI) 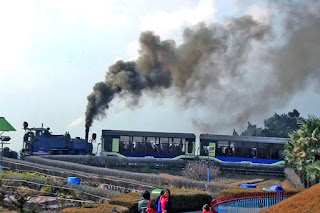