Darjeeling not excited, rather irritated by upcoming civic polls

Residents of Darjeeling, also known as 'Queen of Hills' are rather irritated with the civic polls as the poll season falls during the peak tourist season, making the town a traffic nightmare with over 10,000 vehicles -- also coming from Kalimpong, Kurseong and Gangtok -- lining up the narrow alleys of the tiny hill town.

Vehicle owners, for whom summer is the peak tourist season to cater to visitors from the plains of Bengal, claim that police officials taking their vehicles on hire for election duty do not pay them on time.

"They only give 10-15 litres of petrol every day. We have to shell out money from our pockets to pay our owners," Jit Bahadur Thapa, a local driver said.

"Had the police and poll officials not hired our vehicles, we could have used them for tourist purposes. We are bearing losses in this peak tourist season," said vehicle owner Sonam Yonzon.

Locals also say processions and speeches by politicians increase the problem of traffic jams. "The situation is acute in the outskirts of town. We have to wait in long traffic jams because of processions by the Gorkha Janmukti Morcha, Jan Andolan Party and Trinamool Congress. Some often happen simultaneously, making the situation a nightmare for us and tourists," said driver Abhijeet Thapa.

On the other hand, locals who already face shortage of vehicles during peak tourist season have to wait in longer queues for an average of 45 minutes to get vehicles to travel as less as 10 km.

Vehicles also take up pedestrian spaces on the narrow roads. "Many a times, vehicles nearly run us down. Our town has not seen a change in any of the 32 wards in the last five years. Elections are a big headache for us now," said Roshni Bhujel, a shopper at Hill Cart Road in town.

On the other hand, hotel owners also claimed that they did not make the usual money, made during tourist seasons, as some rooms were given to officials. "We can't hike room rent due to an agreement among hotel owners. So rooms are already packed and we had to turn down many tourists as some were allotted to electoral officials," said Bikram Das, owner of a hotel near Motor Stand in the town centre.

"We can only hope that situation improves after the election is over on 14th," he added. 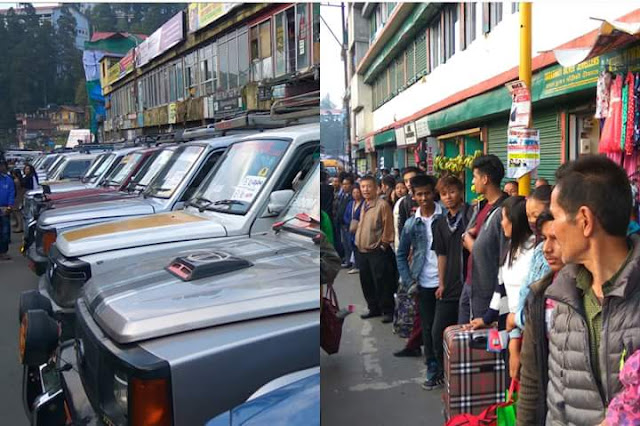