Kolkata Police recovered Rs one lakh in fake currency notes in denominations of Rs 2,000 from Samserganj area of Murshidabad and arrested two persons for their alleged involvement in the smuggling of counterfeit currency. The accused have been identified as Nasiruddin Sheikh and Anarul Sheikh. Police came to know during the interrogation that Nasiruddin is a resident of Suti in Murshidabad while Anarul is from Baishnabnagar in Malda. Police are now investigating if the accused were part of an international racket. Acting on a tip-off, police conducted a raid at Samserganj where the accused were expected to gather on Wednesday morning. There they learnt that the fake currency notes were taken to Murshidabad from Malda. They arrested the accused from a house in the locality where they had taken shelter along with the fake currency. The accused have been booked under various sections of the Indian Penal Code on charges of circulating fake currency notes. The cops have interrogated the accused about the modus operandi of the gang. According to the preliminary investigation, police suspect that currency notes were brought into the country from Bangladesh. They have started a probe to discover where the counterfeit currency was being taken from Samserganj. The incident has prompted the authorities to start a detailed probe to find out if the suspects were part of an interstate fake currency racket. In a similar incident two months ago, police had seized fake currency notes to the tune of Rs one lakh from Malda and had arrested two persons, who had also had firearms and cartridges in their possession. The investigating officer of that case is now probing the matter to find out if the two incidents are linked. In a statement, the police have said that the Dhulian area of Samsergunj has become a corridor for the smuggling of fake currency notes. The notes are entering districts like Malda and Murshidabad from Bangladesh. Police in the two districts have become more vigilant as a result of these episodes and people involved in the smuggling of fake currency are being arrested at regular intervals. Under interrogation, the two suspects told the police that they had been assigned to smuggle the fake notes to the Jharkhand border. Police are now trying to find out who else is involved in the crime. 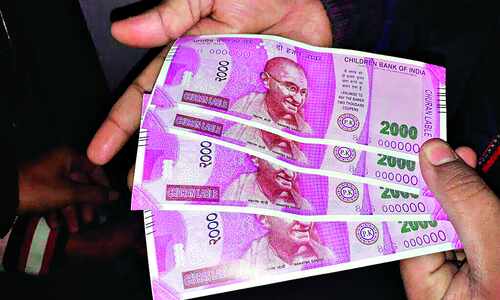 shopfastnotes said…
I read the above article and I got some knowledge from your article.Buy Undetectable Counterfeit Money Online It's actually great and useful data for us. Thanks for share it.
25 March 2021 at 11:12

Mr. Rubben Visser. said…
I admire this article for well-researched content and excellent wording. Thank you for providing such a unique information here. Buy high quality AUD bills online
6 May 2021 at 05:15