- May 25, 2017
Chief minister Mamata Banerjee will visit the Darjeeling hills in the first week of June when she is expected to play the development card to drive home the point that the Gorkha Janmukti Morcha has failed to deliver on its promises.
The chief minister's tour is all the more significant after the Trinamul Congress has made inroads into the hills by wresting control of Mirik municipality from the Morcha and winning a few seats at Darjeeling, Kalimpong and Kurseong municipalities.
On June 3, Mamata will arrive in Mirik, around 50km from here, where she will attend a government programme. The next day, she will attend a similar programme in Darjeeling, sources in Trinamul said here today.
During her visit, she will inaugurate new projects and will lay foundation stones of few more schemes, which sources said, would come up at different places across the Darjeeling hills.
Trinamul leaders in the hills said Mamata would continue to play the development card that has brought dividends for the party in the hills.
"We are expecting some major announcements during her visit. Now that we have won the Mirik municipality, it is obvious that the state will put best efforts to expedite development in the town and across this new sub-division to drive home the point that the GTA has failed to meet people's aspirations and the Morcha has only used the Gorkhaland sentiment to bag votes," a Trinamul leader in Kurseong said.
After Trinamul has won the civic polls in Mirik, Mamata took no time to "repay gratitude" to the hill population and announced the name of Shanta Chhetri, a Trinamul leader from Kurseong as one of the Rajya Sabha candidates of Trinamul.
Another important reason for the chief minister's visit, Trinamul insiders said, is recent remarks of Bimal Gurung. The Morcha chief, while addressing a party meeting in Darjeeling on Monday, had hinted at resuming the movement for Gorkhaland.
"We have to get justice from the Centre by 2019 (when the present NDA government's term ends). Even a mother will not know that a child is hungry if the child does not cry. We have to go for an andolan; we must be ready; the leaders must also be ready; they should not run away (like in 2013). They have to be ready to be in jail," he had said.
In such a situation, particularly when several hill voters have supported Mamata's party even though the Morcha coined the "Gorkhaland versus Bengal" slogan ahead of the civic polls, Trinamul has realised that its development card has paid.
"As the Morcha is hinting at the resumption of the movement, the chief minister's visit is significant. She can elaborate on the state's plan of development and make people analyse the moves of both the parties," a leader said.
Telegraph 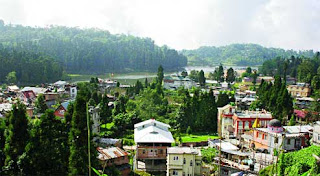