- May 26, 2017
Tourist footfall in Darjeeling has peaked and so have the hotel tariffs much to the chagrin of tour operators who believe the industry should discipline itself.
Pradip Lama, the general secretary of the Darjeeling Association of Travel Agents, said: "The arrival of tourists in the region is at its peak. However, hotels which used to charge in the range of Rs 500 to Rs 1,000 are now taking over Rs 2,000 from customers. Some hotels have removed tariff charts and when there is scarcity of rooms, rates are being negotiated at will."
Tamang said: "Even taxis fares have gone up. Taxi rates have not been revised for some years now. However, it is time from everyone in the industry to be ethical while conducting business."
There are around 390 hotels in Darjeeling town and most have little rooms to spare. Availability of taxis is also a major concern in the hills not just for tourists but also for local people.
It is estimated that around 3.5 lakh domestic tourists and roughly 40,000 international travellers visit Darjeeling annually. The March-mid-June period is the longest tourist season and accounts for nearly 60 percent of the annual tourist footfall in Darjeeling.
Sangay Bhutia, the president of the Janmukti Hotel Owners' Association, said the administration should make it mandatory for all hotels to display tariffs. "This would put a check on a lot of issues."
Many hoteliers, however, said solving the issue was easier said than done. "Hotels have not been categorised and the government must take this initiative. They need to visit each and every hotel, check their amenities and categorised. At the moment, the hotels can display any tariff that they want," said a hotelier.
While most low-end hotels are being accused of overcharging, a hotelier pointed out that it was unfair to only target them. "Some of the better known hotels give huge discounts during off-season. Their rates are so low that it can give competition to low-end hotels also. Most of the hotels in Darjeeling have been taken on lease by people from the plains. If there is disturbance, these people will find it difficult to pay the lease amount," said another member of the association.
Siddharth Dorji, the deputy superintendent of police (Sadar), today held a meeting with hotel owners, travel agents and taxi operators in Darjeeling. It was agreed that a traffic grievance cell would be set up and helpline would be prominently displayed by all taxi syndicates and taxis. The police also want all hotels to prominently display their tariff and is also planning to form a team of plainclothes policemen to conduct checks.
Pradip Lama today requested the police not to requisition taxis from Darjeeling for government programmes, especially during chief minister Mamata Banerjee's visit to the Darjeeling hills on June 4 and 5. "We are finding it difficult to provide taxis to tourists but at this time, police are requisitioning vehicles for the chief minister's visit. This time around, we would request the police to engage vehicles from other districts," said Lama.
A police officer said they would try their best not to inconvenience the industry stakeholders.
By
Vivek Chhetri
Telegraph 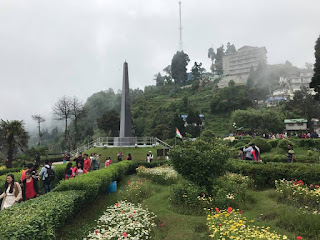