- May 21, 2017
The BJP on Sunday alleged that anarchy was prevailing in the education sector and that democracy was at stake in West Bengal under the ruling Trinamool Congress.
‘A Naxal-like situation has arisen in the state nowadays. There is an atmosphere of total anarchy in the education sector. Democracy is at stake’, state BJP President Dilip Ghosh told a press conference here.

He said education had taken a backseat in schools and colleges which had become the hotbed of militant student activity. Teachers were being threatened by students and education had lost its sanctity. Students were attending schools only for midday meals, Ghosh said.
On the other hand, democracy was at stake in the state. Elections were marred by violence and the opposition parties such as the Left Front and Congress had lost their relevance, Ghosh said adding that the BJP had emerged as the principal opposition party in the state.
The Bharatiya Janata Party (BJP) will organise fairs at 50 different locations in the state to make people aware of the schemes and achievements of the Modi government in its last three years of office. “The party will organise fairs at 50 different locations in West Bengal between June 9 to June 11. As many as 25 party leaders and union ministers will attend the ‘mela’,” he added.
Asked about the possibility of PCC president Adhir Chowdhury joining the BJP, Ghosh said, “If he joins the party, he will be welcome but no such proposal has yet been made from his side.” The statement assumes significance as it comes close on the heels of Chowdhury saying that his party will not tie up with the TMC in West Bengal, as long as he remained the state president.
Ghosh said Chowdhury was in a ‘sandwich’ situation. “He (Chowdhury) is struggling for his existence. On the one hand, he is constantly fighting against TMC while onthe other hand, his leader Sonia Gandhi is having tea with Mamata Banerjee and discussing ways to form an alliance in West Bengal.”
The PCC chief was referring to Chief Minister Mamata Banerjee’s recent meeting with Congress president Sonia Gandhi in Delhi. 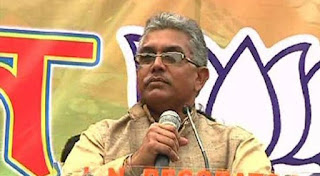