Nine alleged poachers, including a Bhutan national and four Assam residents, were arrested by the forest department from Alipurduar district.

The arrests have brought to focus an international corridor between India and Bhutan used by smugglers to deal in animal parts.

According to the alleged smugglers, Gelephu, a town located in Sarpang district of Bhutan and close to Indian border, is a transit point used by them.

A team led by Sanjay Dutta, the range officer of Belakoba, reached Barobhisa, located close to the Assam border in Alipurduar district, and arrested them.

Sources said Karnabol is a panchayat member of the BJP in Kokrajhar district, Assam.

"Namgey used to help in carrying the animal parts from India. On many occasions, the poachers have travelled to Assam via Bhutan to evade arrest and he used to make the arrangements then," a forest officer said.

Sarbel, he said, used to provide shelter to the poachers at his home, 20km from Gorumara National Park.

M.R. Baloch, the additional principal chief conservator of forests (wildlife, north), said. "Our staff posted at the Belakoba Range under Baikunthapur forest division carried out the operation and arrested these persons. A leopard skin and some bones, suspected to be of the same animal, have been recovered from them, along with important documents."

"During interrogation, they have revealed that animals are poached in north Bengal and Assam and then their body parts are collected at different locations of Alipurduar and Jalpaiguri districts. From there, these are smuggled into Bhutan and then to other countries," a senior forester said.

Sources said the foresters got information from their counterparts in Assam that poachers based in Assam had killed the rhinos, buried their carcasses and fled with the horns.

Jacob Singh, who is considered to be the mastermind of this poaching and smuggling racket, is under treatment at a hospital in Guwahati after he met with an accident.

All the accused would be produced in a court in Jalpaiguri tomorrow and charges under the Wildlife (Protection) Act, 1972, have been brought against them, forest sources said. 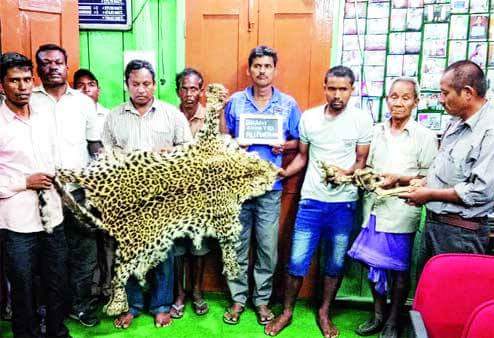