The 42nd State Day was celebrated with much glory and fervour at the State level function organized at Chintan Bhawan today. The function was graced by Governor of Sikkim Shri Shriniwas Patil as the Chief Guest, and Minister for Energy & Power and Labour Departments Shri D.D. Bhutia as the Guest of Honour.

On their arrival, the Chief Guest and the Guest of Honour offered garlands on the statue of Late Shri L.D. Kazi at Chintan Bhawan premises.

The Governor in his address conveyed his best wishes to the people of Sikkim on the occasion of State Day and recorded his appreciation for the people who contributed immensely in establishing a democratic Government of the people in the State. He stated that the occasion of State Day reminds one of the extraordinary journey of the people of Sikkim. He maintained that the progress made by the State has been the result of collaborative effort towards achieving the vision of the Government through active participation from all quarters.
The Governor outlined some of the unique feat achieved by the State and also highlighted the ongoing activities of the Government.
The Governor also congratulated all the individuals felicitated in today’s function.
Shri Patil in his address congratulated the Chief Minister of Sikkim Shri Pawan Chamling for being conferred the first Bhairon Singh Shekhawat Lifetime Achievement Award in Public Service at Jaipur, Rajasthan on 15th May 2017.

Earlier, the Governor presented the L.D. Kazi Award for Democratic Movement to Shri Mani Raj Rai also known as Kalez Maila from Legshep, West Sikkim for his valuable contribution during the movement for democracy in the State.
Likewise, the Jeevan Raksha Padak Award by the President of India was awarded to Shri Tshewang Thinlay Lachungpa for his act of bravery in saving a girl from a bear attack.
Also on the occasion, Late Shri Palden Yeshey Lepcha, Ex-Technical Officer, Sikkim Government Press was posthumously felicitated by the Governor of Sikkim as a recognition of his sincere service.

Earlier, Chief Secretary Shri A.K. Shrivastava in his welcome address read out the message of the Chief Minister for the occasion. He also highlighted the developmental activities of the Government in every sector and also threw light on some of the upcoming projects envisaged by the State Government. The Chief Secretary urged the officers and staff of all departments to participate proactively in the developmental process and help sustain the good image of the State.

The first issue of the monthly magazine ‘Sikkim Today’, a theme-based chronicle prepared by the Information & Public Relations Department, documenting developmental activities and success stories was also released on the occasion by the Chief Guest, Guest of Honour and other dignitaries.

A short documentary film produced by the Information & Public Relations Department, showcasing the developmental journey of Sikkim from 1975 to the present day was also screened on the occasion. 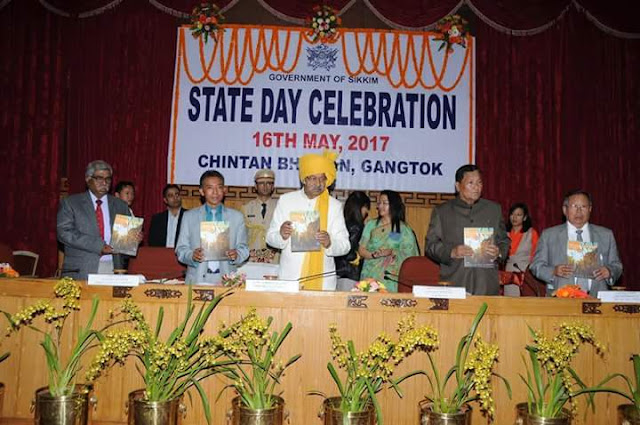