Officers of Kurseong forest division recovered the carcass of a leopard near Khaprail Bazar under Matigara block.

The animal's body has surprised local residents as they had never witnessed movement of carnivores in recent years.

According to forest sources, residents of Khaprail Bazar, 15km from here, first spotted the leopard, lying beside the road in an abandoned plot. They then informed the staff of Bamonpokhri forest range who reached the spot and recovered the carcass. It was taken to the range office where vets from Siliguri carried out a post-mortem.

"It was a male leopard and aged around four years. We are trying to find out how it strayed into the area. Its cause of death can be ascertained only after we receive post-mortem report from vets," Sandip Berwal, the divisional forest officer of Kurseong forest division, said.

Sources, however, said the animal might have died after being hit by a speeding vehicle. As there are no external injuries, except some blood clots in the mouth, foresters are not ruling out the chance of poisoning either.

Although the area is 15km from Siliguri and adjacent to a tea garden, the incident left the residents panicked.

"Incidents of elephant depredation are common in our locality. But this is for the first time that such an incident has happened here. No leopard was sighted in our area in recent years. Now that a leopard's carcass has been recovered, we are worried that more such leopards have entered the area," Ajay Kumar Sha, a local resident, said.

The nearby forest area, he said, is around 4km away.

"In the Dooars, it is a common for leopards to sneak into tea plantations, particularly when the females deliver cubs. There is a small tea estate nearby, but leopards were never seen there," he said. 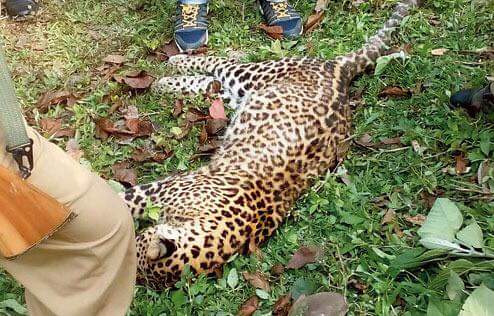