According to reports, a joint team of Kolkata Police's detective department and Howrah City Police carried out a raid at a house at Noor Mohammad Munshi Lane area in Howrah's Tikiapara area on Monday late evening and busted the firearms factory.

"We recovered at least 30 incomplete 9mm pistols and several machines, used for making arms, from the busted factory and have a person in connection with the case," a senior official of Kolkata Police told IBNS.

"Earlier on May 10, we arrested one Morselem Sheikh from Kolkata's Posta area with firearms and based on his statements, we carried out the raid in Howrah yesterday," the official said.

Meanwhile, a special investigation team of state Criminal Investigation Department (CID) raided a house at South Bidhangarh area under Rabindranagar Police Station limits in South 24 Parganas district on Monday night and unearthed another firearms manufacturing factory, which was being run on the ground floor of a multi-storey building.

"Acting on a tip off, we busted the firearms manufacturing unit and seized 38 pieces of 7.62 improvised automatic pistols fitted with magazines and arrested three persons, including the owner of the house," a senior CID official told IBNS.

"Besides booking the building's owner Gautam Roy, we have nabbed two firearms makers- Md. Nazrul and Md. Sabir Ali, who hail from Munger in Bihar," the official added. 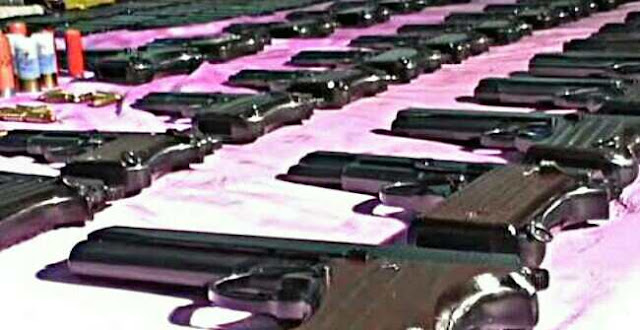