- May 25, 2017
A 17-month old toddler was found desperately trying to drink milk from her mother's body, absolutely arcane to the fact that she's dead.
The incident happened yesterday in Damoh district, Madhya Pradesh, India, where a couple of passersby saw a woman lying next to railway tracks.
Those who saw her immediately informed the police, but upon reaching closer they saw the toddler too.
'We saw a woman lying near the railway track and informed the police. 'But when we got closer we spotted a child next to her crying and drinking her milk. It brought tears to our eyes.' said Monu Balmiki, one of the witnesses, as reported by DailyMail.
They further added that the toddler was hungry and crying for his mother. When he got no response for her, he tried drinking milk himself from her body.
As of now, the police has taken the woman's body to the hospital for post-mortem and to identify the cause of death. The toddler has been taken to a nearby local Child Welfare Committee.
Watch Video https://youtu.be/WOFRGtFw9fU 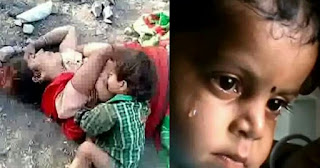