West Bengal - Man falls off train while talking selfie, his 4 friends die while trying to save him

A man’s quest to take a dramatic selfie resulted in the tragic death of four others near Howrah, Bengal, on Thursday evening.

Police said Taraknath Makal was travelling by train with four friends – all aged between 25 and 30 years – when he reportedly leaned out of the door to take a selfie photograph. However, he lost his footing and fell off the train. Makal’s companions jumped out to save him, but were mowed down by another train coming from the opposite direction.

While the four friends – Sumit Kumar, Sanjiv Polley, Kajal Saha and Chandan Polley – lost their lives, Makal is fighting for his life in a hospital.

The incident occurred between Liluah and Belur stations, in the vicinity of Howrah, while the five were returning from a temple in Tarakeswar after offering prayers.

Police said though the compartment was not crowded, Makal was hanging out of the door in an attempt to take a selfie. They plan to question the hospitalised youth to know exactly how the incident unfolded.

According to a witness, the four friends failed to see the oncoming train because of low light conditions. “After the first man fell, his friends jumped off and started running towards him. In their excitement, they failed to notice another train hurtling towards them,” he said.

Another witness was quoted as saying that Makal hit his head against a post when he bent over to retrieve his cellphone when it slipped out of his hand.

The five hailed from Dumdum in the outskirts of Kolkata. While some were employed at industrial units in the locality, others were autorickshaw drivers.

A number of people have died in attempts to take selfies across the country. According to a 2016 study conducted by scholars of the Carnegie Mellon University and the Indraprastha Institute of Information in Delhi, India accounts for more selfie deaths than any other nation. 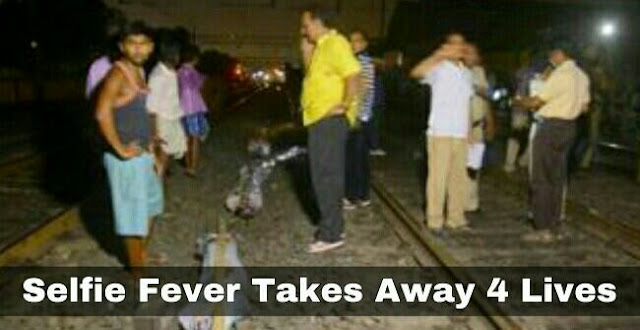