A vehicle coming from Gangtok towards Siliguri had a miraculous escape today morning.

One of its rear tyres came off and landed on the fields nearby Salugara area.

There were two people in the Sikkim number vehicle SK01 J0790 and both are safe.

Eyewitness travelling in another vehicle back of this said as the tyre came off the vehicle kept moving and some metres ahead caught fire.

Soon the driver stopped the vehicle somehow. Luckily he had a fire extinguisher which helped in putting the fire off.

If there had been more people sitting at the back this could have been more dangerous.

Eyewitness say the rod to which the tyre was attached had broken apart as tyre bolts were still intact. 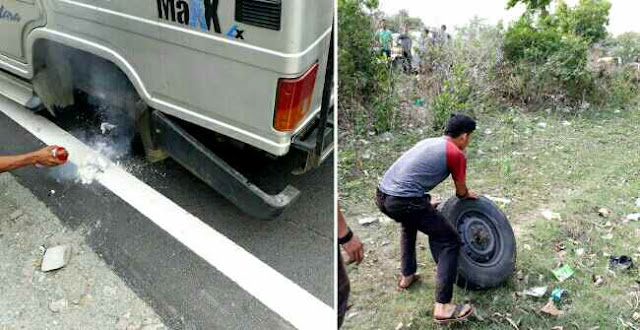