True Gorkha: Shout Out to Mirik Boy Abhishek Thapa - A Jawan with the Gorkha Rifles

We would like to send a big shout-out to Abhishek Thapa for appearing and writing his final-year graduate examination. While it may appear to be quite a common affair but what sets apart Abhishek's story is his determination and never-give-up attitude.

A jawan with with Gorkha Rifles, currently posted in Jammu & Kashmir, Abhishek took a month's leave to appear for the final-year graduate examination, thereby displaying exemplary dedication and commitment to his studies.

A student of Mirik College, Abhishek completed his schooling from Panighatta High School near Siliguri. Having lost both his parents early, Abhishek was taken care of by his brother Prabhakar, who left no stone unturned to ensure that Abhishek did not have to quit his studies, and supported him through all the thick and thins of life.

It was during his 2nd year degree examination that Abhishek came to know about recruitment taking place for the 1/1 Gorkha Rifles, and gave it a try. He succeeded. However, the student in him did not die,  and he studied and prepared for his examination even as he underwent a rigourous army training.

Abishek have always held studies to be his main priority and aims to do something even better in life - the reason why he took leave and came down to complete his exams. He aims to clear the Short Service Commission examination after graduating and thereby being commissioned as an officer in the Indian Army.

Abhishek doesn't know how successful he would be in fulfilling his dreams, but like a brave jawan who holds on to his position till the very end, he wants to give his best shot to it.

In Abhishek, we see a hope for better tomorrow, and it is individuals like him who give us a reason to move on in life and battle it out.

Well done and good luck for all your future endeavours, brother! We are already so so proud of you. 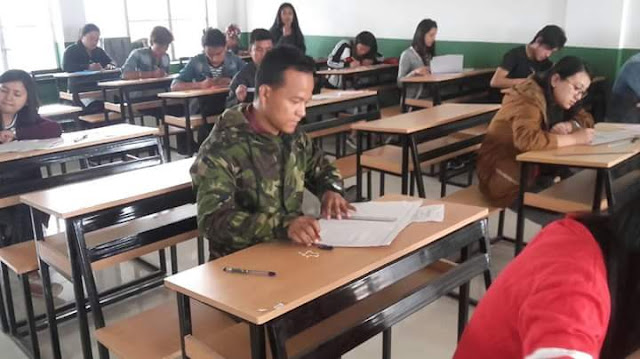