TMC-GNLF coalition back on track in Hills

The Trinamool Congress–Gorkha National Liberation Front (GNLF) alliance is back on track with Aroop Biswas, TMC Observer for Darjeeling and Kalimpong clarifying that the violation of the seat-sharing formulae by both the parties was done deliberately as a part of the strategy. Though in Mirik and Kalimpong Municipal areas, the seat sharing equations have worked out well between the TMC and the GNLF, in Darjeeling and Kurseong there is some hitch. It was agreed upon that out of the 32 wards in Darjeeling, the TMC would field candidates in 20 wards and the GNLF in 12.  However, the TMC has fielded candidates in 21 wards and the GNLF in 12. In ward number 26 there are both TMC and GNLF candidates. The agreement also dictated that out of the 20 wards of Kurseong Municipality, the TMC would field candidates in 12 wards and the GNLF in 8. However, the TMC has fielded candidates in all 20 wards with the GNLF fielding candidates in 14. "This was part of the strategy. Darjeeling has a history of candidate intimidation, especially of the opposition parties. Both the GNLF and the TMC had fielded "dummy" candidates. They will be withdrawn with both the parties adhering to the seat sharing formulae," stated Biswas. He further added that in Darjeeling there would be 20 TMC and 12 GNLF; in Kurseong 13 TMC and 7 GNLF; in Kalimpong 19 TMC and 4 GNLF and in Mirik 7 TMC and 2 GNLF candidates. "The seat sharing alliance is intact and we will defeat the Gorkha Janmukti Morcha together. We will also campaign together," added Biswas. The TMC Observer held meetings with party supporters and candidates. "We discussed our campaign strategies. TMC youth president Abhishek  Banerjee will also be camping in the Hills. He is slated to arrive at the Hills on May 3," stated Biswas.  He also stated that the TMC-GNLF will lay stress on good governance, democracy and eradication of corruption along with civic issue. "Mamata Banerjee has done a lot of development in the Hills. The municipalities under the GJM have failed miserably. They have done nothing for the people," alleged Biswas. "We welcome the statements of minister Aroop Biswas regarding the coalition. We will also withdraw our dummy candidates," stated Neeraj Zimba, GNLF spokesperson Meanwhile, the candidature of Dhurba Bomzan who the GJM had projected as Chairman candidate of Mirik was rejected during scrutiny on Wednesday.  Along with this, the candidature of Sudha Lama Thapa, GJM candidate of ward 15; Laxmi Sunwar, JAP candidate of ward 19; and Balika Dorjee, Independent candidate of Ward 6 of Kalimpong municipality area were also rejected. 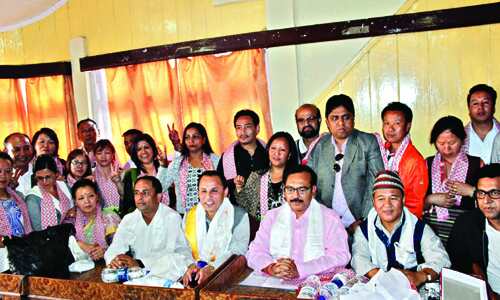