A motorcade of VIP vehicles from Sikkim probably heading towards Bagdogra airport knocks down a scoty rider between Gandhi Nagar and Champasari stretch in Siliguri today morning at around 10.30 to 11am.

Eyewitness say the first vehicle was the Pilot car with siren and the youth was knocked down by the vehicle after it. The convey had many vehicles behind it but none stopped.

The youth was badly injured with head injuries and one hand fractured. Locals immediately came for help and took him to nearby hospital.

Eyewitness say police was standing nearby and gave safe passage to the VIP Cars. None of them were stopped.

Locals after seeing this happen blocked the highway and asked the police present there to register an FIR against the vehicle. None were able to jot down the vehicle number as it was at high speed.

Soon police from Bhaktinagar station arrived and gave assurance that an FIR would be registered and requested locals to lift the blockade. Later four eyewitnesses were taken to Bhaktinagar police station to register the FIR. 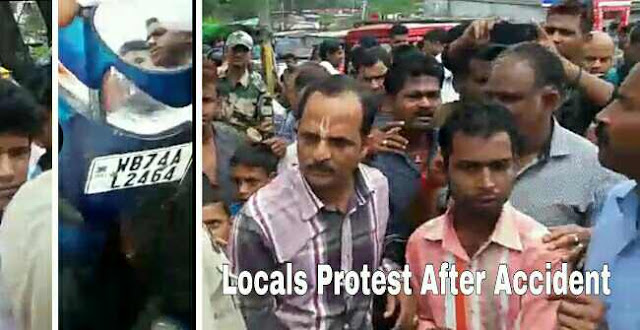