Many farmers in West Bengal's Jalpaiguri, South Dinajpur and Darjeeling depend on Teesta water for irrigation.For Bangladesh, its rice belt is hugely dependent on Teesta. One crore people depend on it.Farmers in both West Bengal and Bangladesh face shortage of water during the dry April-June period.

The Teesta river agreement, hanging fire for 34 years, was almost signed but for the last-minute decision of West Bengal Chief Minister Mamata Banerjee to miss the bus, literally, to Bangladesh in 2011. The then Prime Minister Manmohan Singh went to Dhaka, held meetings and came back. Teesta agreement was not signed.

Prime Minister Narendra Modi is too keen on getting the deal done. Bangladesh Prime Minister Sheikh is here in India to hold talks with hopes that things move forward. Sheikh Hasina has another election to contest next year and Teesta agreement could help her beat a two-term anti-incumbency.

But, Mamata Banerjee is unwavering. Mamata maintains that the Teesta river agreement, as per the wishes of Bangladesh, will hurt West Bengal farmers.

The Teesta river originates from almost the top of the Himalayas in Sikkim. The melting waters of the Kangse and Zemu glaciers form Tso Lhamo lake near the highest Himalayan peak in India - the mighty Kanchenjunga. The Teesta flows from there, majestically, through the high mountains downwards.

After meeting its most significant tributary, the Rangeet river near Teesta Bazaar in Darjeeling, Teesta springs to full life.

The Teesta flows through West Bengal and enters Bangladesh before merging with the Brahmaputra river (called Jamuna there) to drop into the Bay of Bengal.

Teesta travels nearly 414 kilometres on its journey from the high Sikkim Himalayan mountains to the Bay of Bengal. Of its total length about 150 kilometres lie in Sikkim, 123 km in West Bengal and about 140 km in Bangladesh, where it is the fourth largest river.

WHY IS TEESTA IMPORTANT?

West Bengal has the shortest stretch of Teesta flowing through it but thousands of farmers in Jalpaiguri, South Dinajpur and Darjeeling dependent its water for irrigation. Mamata Banerjee has to face panchayat polls in 2018. She would not want to annoy farmers of the state.

For Bangladesh, its rice belt is hugely dependent on Teesta. The catchment area of Teesta supports about 1 crore people - little less than nine per cent of Bangladesh's population. The farmers of Rangpur, Nilphamari, Gaibandha, Kurigram and Lalmonirhat are dependent on Teesta for irrigation.

During the dry season of April-June, both West Bengal and Bangladeshi farmers face shortage of water.

To meet the irrigation needs of the farmers, the West Bengal government started building a barrage in the catchment area of Teesta in the early 1980s. While Bangladesh objected to it, the Government of India began negotiations.

An ad-hoc agreement was concluded between India and Bangladesh in 1983. The arrangement provided for 39 per cent Teesta water to India, 36 per cent to Bangladesh while 25 per cent was left 'unallocated'.

But, the understanding did not work. In 1984, a joint-river commission was formed to collect hydrological data and formulate a draft agreement for Teesta water sharing.

Bangladesh has been insisting on 50-50 share of Teesta river water - particularly during the months between December and May.

WHAT DID THE JOINT-RIVER COMMISSION PROPOSE

The commission proposed enhanced water-share for Bangladesh. The new formula gave 42.5 per cent of Teesta water to India, 37.5 per cent to Bangladesh while 20 per cent was left 'unallocated'.

Work began on this formula and a draft agreement was agreed upon when Mamata Banerjee opted out of Manmohan Singh's visit to Bangladesh in 2011.

After the change of government in New Delhi, Bangladesh PM Sheikh Hasian renewed her efforts to finalise the Teesta agreement. Prime Minister Narendra Modi has also expressed his willingness to close the deal.

During his visit to Bangladesh, Modi told his hosts that "Our rivers should nurture our relationship, not become a source of discord" clearly hinting that he was not yet ready to go ahead without taking Mamata Banerjee on board. 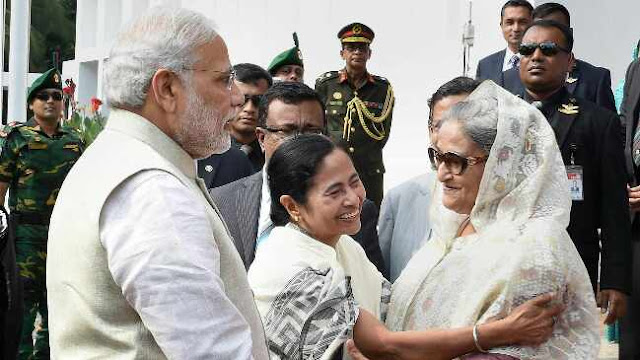