The youth wing of the Jana Andolan Party held demonstrations in Kolkata to protest the construction of a tourist lodge at Tiger Hill in a clear message that the hill party would no longer play second fiddle to Trinamul in the hills.

The JAP headed by Harka Bahadur Chhetri and other hill parties have opposed the constructions at Tiger Hill in Senchel Wildlife Sanctuary, alleging that the work is being carried out without proper environmental clearances.

A 21-member group of the JAP’s Yuwai Ekai demonstrated in front of Nabanna and the new secretariat building of the tourism department in Calcutta but the protest had to be cut short after police intervened. The JAP members then held the protests at Park Street and Chowringhee.

Amir Basnet, the spokesman for the Yuwai Ekai, said over the phone from Calcutta: “At both Nabanna and the new secretariat, police cited prohibitory orders to stop our protests. We told them the fact that we had come not to protest, but to protect our hills from being degraded by rampant constructions.”

Basnet said they had shifted the demonstration to Chowringhee and Park Street to spread awareness among the ordinary people of Calcutta of “the unwanted constructions” at Tiger Hill in Darjeeling district.

The protest in Calcutta is seen as a clear message by the JAP that it won’t go along with Trinamul in the hills any more. In the last Assembly elections, the JAP had joined hands with Trinamul and the GNLF.

“We will go alone as we have not found any party whose ideals match with those of us. We are an independent entity with our own vision but some political elements both in Darjeeling (read Morcha) and outside (read Trinamul) tried to confuse the hill people. Our demonstration is also a message for chief minister Mamata Banerjee that we will not accept anything and everything,” said Chhetri. 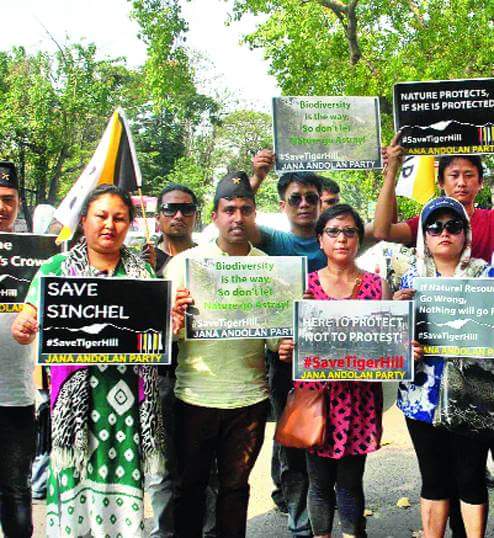