It is been almost four days, this kid Master Pradeep Rai was electrocuted due to the negligence of Power Dept.

He is severly burnt and is admitted at STNM, he is in serious condition as he hails from poverty striken family background.

Immediately after news and picture was sent by Perbing Panchayat Mr CK Gautam of Ranka East Sikkim , the VOS corrospondent Ajay Agarwal visited hospital took a stock of situation and found  neither any dept personnel has visited so far.

Interacting with parents of victim they told he is burnt badly and hasn't opened eyes, his lips have swelled due to high volatge electrocution.

They told a diary has been lodged at Sadar PS, Gangtok.

When asking how it happened ?, parent told their kid (victim) and neighbor kid were out at 3 PM on 11 April , after some times they heard that their kid is severly electrocuted and is serious.

What will be fate of this kid ?, god knows but it is clear that Power Dept has forgot Humanity despite it was their negligence that resulted condition of kid at this state. 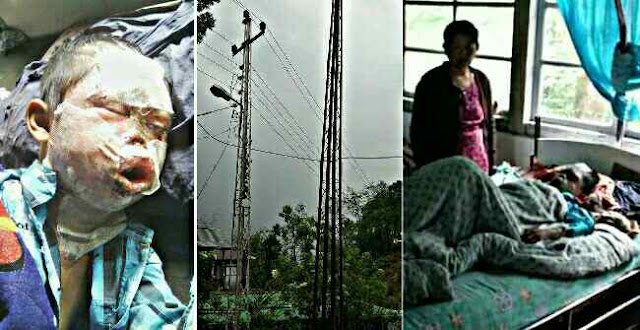