The demand for separate state of Gorkhaland comprising parts of Bengal’s Darjeeling district resurfaced at the national echelon when Bimal Gurung, president of Gorkha Janmukti Morcha (GJM), appealed to all the 33 National Democratic Alliance (NDA) partners to support the cause. The meeting was held on Monday evening in Delhi.

In the 2009 and 2014 Lok Sabha elections, the GJM, which commanded a massive base in the Darjeeling hills, supported the BJP and helped Jaswant Singh and S S Ahluwalia win the Darjeeling seat. In both elections, the BJP promised in its poll manifesto that it would look into the long-pending demands and aspirations of the people of North Bengal, including the Gorkhas.

Binay Tamang, assistant secretary of the GJM told Hindustan Times from Delhi that Gurung raised the Gorkhaland issue in his seven-minute speech. “Gurung raised several issues. These included Gorkhaland, the demand for schedule tribe status to 11 Gorkha communities and a central university in the Darjeeling hills,” said Tamang.

“Gurung said that GJM is a committed partner of the NDA and wants to see the promises made in the BJP election manifesto fulfilled. Gurung also appealed to NDA partners to support the cause of Gorkhaland,” said Tamang.

The hill region has so far witnessed two aggressive political movements for creation of Gorkhaland. The movement from 1986 to 1988 was led by Gorkha National Liberation Front and it witnessed the death of 1200 people in violent clashes. The second - between 2007 and 2011 - was led by the GJM. 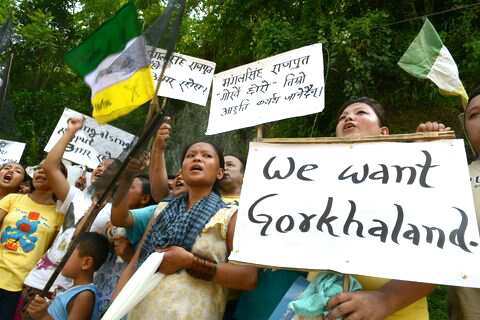