GNLF-TMC to contest municipal elections together

The Trinamul Congress and the GNLF yesterday decided to contest the coming civic polls in the hills together and the ruling party launched a vitriolic attack on the Jana Andolan Party, wondering if it had an electoral adjustment with the Gorkha Janmukti Morcha.

The announcement of the alliance was made by Trinamul leader and minister Aroop Biswas in the presence of GNLF president Maan Ghisingh in Kurseong.

"Trinamul and the GNLF have decided to fight the civic elections together. Every political party has its own agenda and different issues. But this is a municipal election where issues are roads, water and buildings. Those who were in power did nothing in the past five years," said Biswas.

Trinamul and the GNLF have decided not to field candidates against each other and leave the seat to whichever party that is stronger in a municipal ward.

The Trinamul leader was scathing in his attack on the former ally, the Jana Andolan Party of Harka Bahadur Chhetri, though he didn't take the name.

"We want all opposition parties to come with us but you know a lot of people are involved in the Madan Tamang murder case. We do not know who has what commitments. But we are still trying to bring all together," Biswas said, when he was asked whether they would still make an appeal to the JAP to join the alliance.

In the Madan Tamang murder case, Chhetri is also named in the chargesheet filed by the CBI, along with a number of Morcha leaders.

Asked for the second time if the GNLF and Trinamul would still make an appeal to the JAP to join the alliance, Biswas obliquely said Chhetri's party had an electoral adjustment with the Morcha. 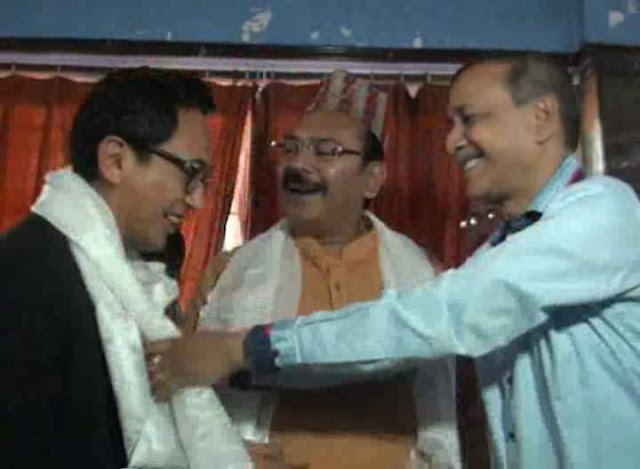