For Every Slap on Jawan, Kill 100 Jihadis, Cricketer Lashes out Against Attack on Soldiers in Kashmir

After a video showing attacks on the CRPF personnel in Kashmir went viral, a number of reactions are coming from every part of the country. People from various walks of life have shown their support for the soldiers, who had shown great resilience even after being attacked by the Kashmiri youths. Kolkata Knight Riders Captain Gautam Gambhir has also expressed his anger on the incident and has demanded strict action aginst those who attacked the soldiers.

He followed it up with another stern tweet that threw light on his staunch patriotic sentiments.

Even Virender Sehwag slammed the misbehaviour of the Kashmiri youth. Putting his foot firmly down, Sehwag said that this rot has to stop!

This is Unacceptable ! Cant do this to our CRPF jawaans .This rot has to stop. Badtameezi ki hadd hai.pic.twitter.com/rZbqGbXk6O 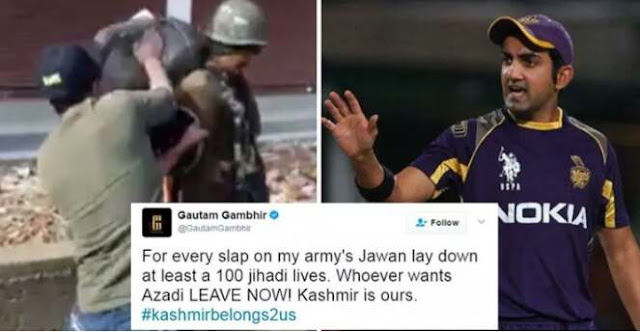