Since 1881, the Darjeeling Himalayan Railway has been whistling alone while passing through the mountains. But steam aficionados have decided to run along with the DHR on May 7, cheering the heritage beauty as its embarks on a ride from Ghoom to Darjeeling.

A unique initiative has been conceptualised by the DHR authorities and the Darjeeling Rehabilitation Service Co-operative Society, an organisation that is into social work, to celebrate the DHR by organising a fun-run with the steam locomotive.

"On May 7, we will organise an event which we are calling, Fun Run with the Heritage Train. The initiative is to celebrate the DHR. It is a world heritage institution and through the event, we also want to promote tourism," said Suman Pradhan, the station manager, DHR, Darjeeling.

On May 7, a steam engine will start from Ghoom and the organisers are calling upon local stakeholders to participate in the event. "We just want people to come dressed in different costumes and colours. People who do not want to run can simply walk singing songs and playing musical instruments. We just want it to be a fun-filled Sunday," said Abdulla Azami, president, DRSCS.

It typically takes around 45 minutes to cover the 7km route from Ghoom to Darjeeling with a 10-minute stopover at the Batasia Loop.

Running with the toy train would not be much of a problem as the average speed of the Darjeeling train is 15km per hour. The track mostly runs along NH55, commonly known as Hill Cart Road, and it is pretty normal for the DHR to stop on its track when there are traffic bottlenecks along the highway.

"We are trying to bring in as many school and college students as possible. To the students, we are making an appeal to come dressed in their traditional attire. There will be prizes for the best dressed students. The competition, however, is only in the students' category," said Pradhan.

The organisers want to the make the run an annual affair.

"Depending on the feedback we receive on that day, we might even think of converting it into a marathon from next year. In future, we would want the tourists to plan and visit Darjeeling just to take part in this event," said Pradhan.

The organisers believe that running with the train would also be a record by itself. "We are trying to enlist with some record books. Some independent observers from outside the region will also be coming to see if it can be enlisted in some record book," said Azami.

The DHR has 13 century-old steam engines along with six diesel locomotives. The fun-run will be with a steam loco. 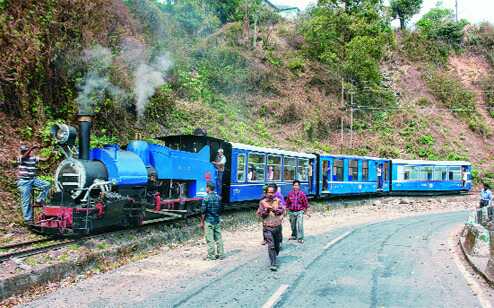