As curtains came down on the life of one of the most charismatic actors of Bollywood, Darjeeling fondly remembered Inspector Raj. Vinod Khanna was in the Hills for almost a month-long shoot of the superhit film Lahu Ke Do Rang in 1978. The Queen of Hills has many a fond memories of Khanna who had starred in this film as Police Inspector Raj Singh. The film directed by Mahesh Bhatt starring Shabana Azmi, Danny Denzongpa, Helen along with Khanna released on September 28, 1979 and was extensively shot in Darjeeling and Hong Kong.  Though the film was shot in different locales including the Lebong Cart Road, Hill Cart Road and Chowrasta, it is largely remembered by Darjeeling for shoot of the song sequence Chahiye Thoda Pyaar where Khanna serenades Shabana Azmi at Lebong and the Chowrasta. Parvaz Mullick fondly remembers the shoot of the song sequence at the Chowrasta in front of his shop. The Mullick family owns the famous curio Habeeb Mullick and Son in Darjeeling. The curio was founded by his great grandfather in 1890. "One day we were in the shop when Vinodji walked in. He requested my father to make 10 boxes which would be required in the song sequence. The boxes would have to fit inside the other (in diminishing sizes.) He required them urgently. Though it was a tedious job, my father Sidiuq Mullick agreed to do it. He would tell us that Vinodji was such a gentleman that he personally dropped in and requested him to make the boxes rather than sending others. After this Vinodji used to drop in often to have a chat with my father. My father has passed away but whenever I see the song on TV and see the boxes, I remember him. It was all because of Vinodji," stated Parvaz. There was a huge rush to watch the shoot. People from far and near used to come to watch the shoot and specially see Vinod Khanna who was a true matinee idol of his time.  "Even the then Princess of Bhutan was in Darjeeling to see the shoot," added Parvaz talking to Millennium Post.  Nila Bagchi, who now lives in Kolkata, was a college student in Darjeeling then.  "All the college girls were gaga over Vinod Khanna. We had all gone to Chowrasta to watch the shoot, rather watch Vinod Khanna. He was truly charismatic. We were even asked to walk behind Shabana Azmi as part of the crowd. However, we were too shy to do that and stood in the backdrop and watched the shoot. It is really sad that Vinod Khanna has passed away," added Bagchi. Hyder Raja, a town resident, remembers him as a "down to earth, great man." He says: "I used to go up to watch the shoot and somehow got friendly with Khanna Saab. I used to even visit him at Hotel Mount Everest after the shoots. We used to chat. He even borrowed my Enfield Bullet and rode around town. His death is a great loss." 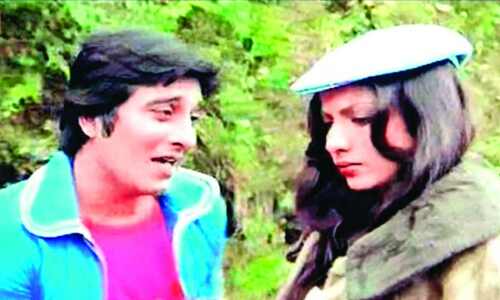