Verify before jumping into any job opportunities whether it is in India, abroad or in hometown.

On receiving complaint from the father of the women in regards to his daughter who was working as a domestic help in one of the posh colony at  Rohini Sec 14 North west district of Delhi, she was placed by the agency named “Om Sai Placement”  T-3833/32, D -136 Gali No. 40, Near Maruti Showroom, Madhu Vihar, Uttam Nagar, New Delhi 110059,by the agent Puja who is from Nepal @ 10,000 Rs per month salary.

Prem Lata worked with the old couple for three months of which one month salary was taken by the agency lady and rest of 2 months were pending. However  Prem Lata Thapa was working but the old couple along with their daughter  started to exploit her, started shouting at her for no reason, made her to work maximum hours, every time threatening to throw her off from the 10th floor, and many other violent words... they even pulled her hair many times.

She was not allowed to go out, was not allowed to use phones, gave food only one time. On top of that she is illiterate so she could not read or write anything except her name therefore it was difficult for her to tell the address, the fact is Prem Lata was working without salary for three months.

Somehow she was successful to operate her mobile phone late at around 1:00am onwards, she then called her parents at home, friends in Delhi and told them about the atrocities faced by her she begged for her life, therefore her parents called us in Delhi to provide immediate assistance the Social activist and VP of Aikkra, ARNOVA immediately made a team to rescue her. I along with Rupen Rai, Santosh Darjee,Sagar Chettri and Benay Shanker, went to search the placement agency address because only the agents knew the victims address and when the Rupen Rai called the agency they denied, Puja worded badly on the call, neither they were willing to release the girl, nor to give the agency and employer address. Therefore we were forced to make a mocktale and made our volunteer to call the puja as the job hunter she agreed and gave them the address. We made three teams A. the two boys went to agency office which was situated at Dwarka Sec 2 Madhu Vihar Solanki Market they met the lady and confirmed their office address. Team B with Bandana Rai went to Police station Bindapur Dwarka sec 2 to give the complain from where the police called the agency and told them to handover Prem Lata asap to us. And made Bandana Rai to speak to her and were called to their office there team C mothers group joined the agency office.

First the lady agent tried to overpower and started her lies. But we had all the proofs we forced her to take us to  Prem Lata’s working place. As in we entered the Rohin Sec. 14 called the police 100 No for the assistance as it is illegal to enter at somebody's residence and moreover the Victim’s employer were Sr. Citizen and a lawyer. There we got very good cooperation of Delhi police team many PCR came to our recue. In the presence of police and proper consultation of guard of the premises and on the call of the old couple in the presence of their relatives we went to their flat because they were not in the mood of releasing the Prem Lata unless they get replacement of her by the agency.

Somehow with our pressure they were willing to release her after completing the police formality. Agency also took the responsibility of paying 30,000 her three months salary as they had already taken 11 months victim’s salary from the workplace. Police took the victims statement, surprisingly old couple started to make false allegations on Prem lata, on the police and the team of Bandana Rai. However the rescue team were all prepared and had completed all the formalities. We finally released Prem Lata and  Puja started acting on paying the salary in the next day we denied her decision we wanted to sort out the matter on the same day, finally they agreed our team followed them till their home and finally agent handed over 3 months salary 28,000 out of 30,000 minus 2, 000 which was paid to Prem lata at early stage. Bandana Rai took the undertaking of Prem Lata and will be sending Darjeeling soon.

At the time of leaving employer Premlata asked unpacked her belongings by old couple checked every details  in front of police and old man even asked her to return 600 Rupees which given to her during their sons Marriage to make new dress  her we asked her to give it back.

Life is not easy outside home therefore prior entering to any job through any resource kindly verify, beware of the agents like Puja who eats hard-earned money of the poor people keeping them as a bonded labour.

When we get such complains our main aim is to save the victim’s life first, one person cannot carry out different stages of the operations therefore we work sensitively with proper cooperation, and coordination with the team and police we do not leave any gape which may give hamper both the parties, Prem lata said they were threatening to push her from the building every now and then she was very  depressed if we were late to rescue her she might have jumped from the building and killed herself.

Many such cases has happened earlier in Delhi NCR many house maids died from North East one of the recent case is Bodo girl from Assam died it is still Mistry whether it was a murder or suicide. After person dies we could only shout, protest and ask for justice but for how long?  Can we bring back the dead person? Whether such victims will get justice? Therefore we always try to save the life of a person instead regreting afterwards whatever it takes.

Special thanks to Delhi Police, Mothers group, and everyone who supported the case. 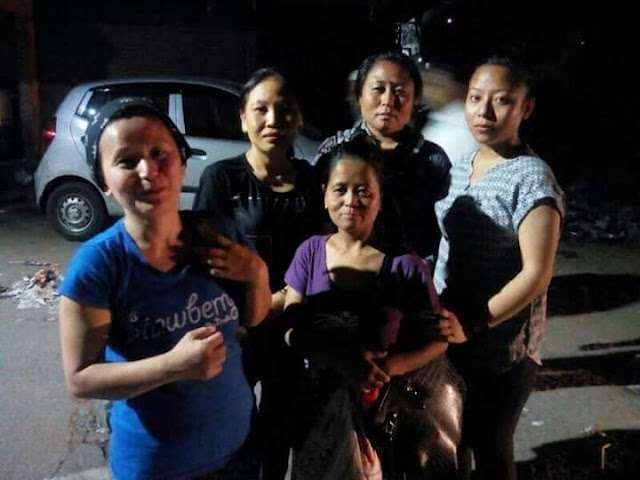