Another Rhino Missing from Gorumara Forest

Forest minister Binoy Krishna Burman today said one more rhino was missing from Gorumara National Park and he suspected that poachers wouldn't have entered the forest without the help of some staff members.

Mounted on a pet elephant, the minister himself inspected the Gorumara forest this morning. Burman's visit follows the recovery of two rhino carcasses from the forest last week.

The carcasses were recovered based on the information given by the Assam forest department which had arrested an alleged hunter.

"It is clear that some forest guards do not visit their assigned areas in the park at regular intervals. I have also learnt that another rhino is missing from the park. The poaching of two rhinos has left us apprehensive about the missing one. We also suspect that the poachers have connections with some of our staff members. Otherwise, how can these people simply sneak into a reserve forest, kill rhinos, cut the horns and bury the animals. It is surprising that the staff here had no inkling of the crime," Burman told journalists.

Sources said the minister had asked the foresters how he could face the chief minister who would arrive in north Bengal tomorrow and tell her about the poaching.

So far, a beat officer has been suspended and the range officer and three other staff members of Gorumara south range have been showcaused for alleged dereliction of duties.

In 2015, there were 49 rhinos in Gorumara. As of now, the estimated population is around 53, sources said.

R.P. Saini, the additional principal chief conservator of forests (wildlife) of Bengal, said Gorumara received a large number of tourists and it was another reason for the poachers' entry into the forest.

Two forest guards and a range officer have been show-caused after some of them allegedly assisted timber smugglers in cutting down trees in the Central Beat of Lataguri Range. 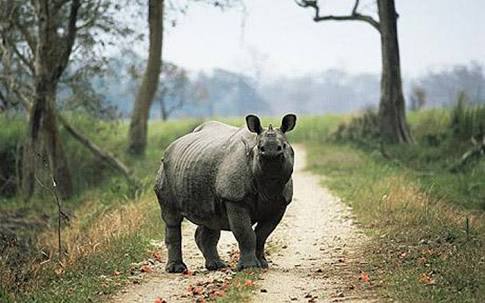