Mohun Bagan may have stormed back into the I-League championship race with a 2-1 win over arch-rivals East Bengal at Siliguri on Sunday, but the victory came at a 'price' for Sanjoy Sen's side.

The All India Football Federation's disciplinary committee on Tuesday charged Mohun Bagan, which 'hosted' the second-leg derby at the Kanchenjungha Stadium - for failing to control the crowd during the match. Acting on match commissioner J Ravishankar's report, the disciplinary committee imposed a fine on the club on two counts: Rs 50,000 for not preventing fans from entering the field after the match and Rs 25,000 for the unruly crowd which hurled bottles and missiles on to the ground during the match.

Thanks to the win over East Bengal, Mohun Bagan have moved up to the second place with 29 points from 14 matches. on Wednesday, they will take on Lajong FC in Shillong where a win will take Sony Norde and Co to the top of the league for the first time, at the expense of current leaders Aizawl FC (30 points from 15 games).

In another development, East Bengal coach Trevor Morgan on Tuesday submitted his report on his team's derby debacle to the club officials. It has been reliably learnt that the coach has taken a strong exception to Trinidad and Tobago international Willis Plaza's antics in the match. Plaza was shown a straight red card by referee A Rowan after the striker hit out at Mohun Bagan defender Anas Edathodika in an off-the-ball incident, reducing East Bengal to 10 men in the 66th minute. The club officials are expected discuss to meet Morgan on Wednesday to decide on the way ahead for the team. 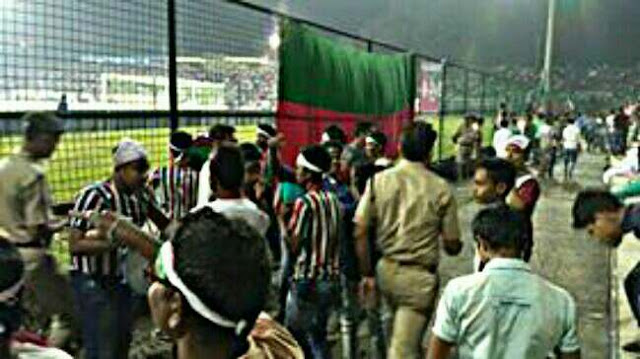