Defending champions India defeated Pakistan by nine wickets in the final of the T20 World Cup for Blind to lift their second straight title on Sunday. Chasing 198, India sauntered to the target at the loss of just one wicket to score 200/1 in 17.4 overs at the M Chinnaswamy Stadium.

Both India and Pakistan entered the summit clash on the back of a terrific run in the league and the knock out stages. India won eight out of their nine matches losing only to Pakistan who were unbeaten.

Opener Prakash Jayaramaiah top scored for India with an unbeaten 99, laying a solid platform for the chase. With his opening partner and captain Ajay Kumar Reddy (43), he added 110 runs for the first wicket. Ketan Patel, who came in at no 3, was retired hurt for 26 but Jayaramaiah continued his assault on the Pakistan bowlers finishing with 15 fours in his 60-ball 99.

Earlier, Pakistan opted to bat after winning the toss and powered by Badar Munir's 37-ball 57, posted 197/8 in 20 overs. With opening partner Muhammad Jamil (24), Munir led them to a good start with 58 runs in 5.2 overs. Ganesh Babubhai Mundakar provided India with their first wicket in Jamil but Munir found an able ally in Amir Ishfaq and together they steered the innings forward with a 60-run partnership for the second wicket. However they lost three wickets in the space of just 23 runs but had reached 132/4 in 12.1 overs. They eventually ended with 197/8 in 20 overs.

For India, Ketan Patel and Jaffar Iqbal picked up two wickets each. India batsmen then put up a dominating show racing to 109 runs in just 10 overs without losing a wicket before Ajay was run out. Despite losing Ketan Patel, who had to leave the field retired hurt, India safely surpassed Pakistan's total, sealing the game in style with a four.

None of the Pakistan bowlers managed a wicket as India won their second straight title with 14 balls to spare.

For his outstanding innings, Jayaramaiah was adjudged as man of the match while Munir was given the man of the series award for his 570 runs in the tournament. 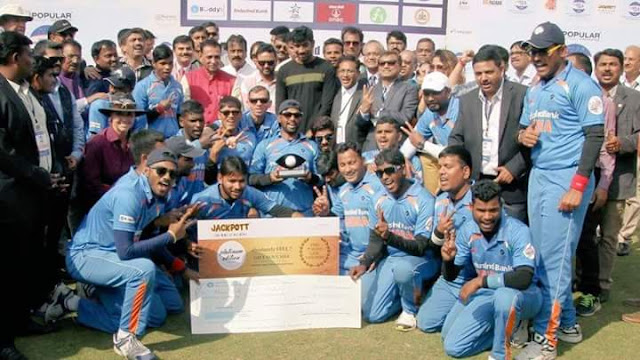