When Snehasis, a full grown Royal Bengal tiger, born in captivity, was transported from Nandan Kanan in Odisha to Alipore Zoo in Kolkata he was put into a cage. He was then transported for open cage safari in Siliguri. There, it was decided that Snehasis would be kept in a cage and let out in the open as a part of the open safari tourist attraction. However, all didn't go as per plans and the forest officials are now in a fix!

Snehasis was let out for the safari along with tigress Shila, on January 23, but it seems like being in the open awakened his wild side and the tiger has refused to return to the cage ever since. On the other hand, Shila has returned to her cage and has been waiting for her partner to return!

While zoo officials thought that the tiger might return to the cage for food, it has learned to dodge them. Snehasis returns to the cage only to snatch the meat kept for him and escapes from the enclosure in no time.

As per experts, although the tiger was born and raised in captivity, being out in the jungle has meant his instincts have taken over and hence he doesn't seem keen to return to life within the confines of a cage.

Meanwhile, zoo authorities are keeping a strict vigil on Snehasis and hope that he will one day return to his cage. 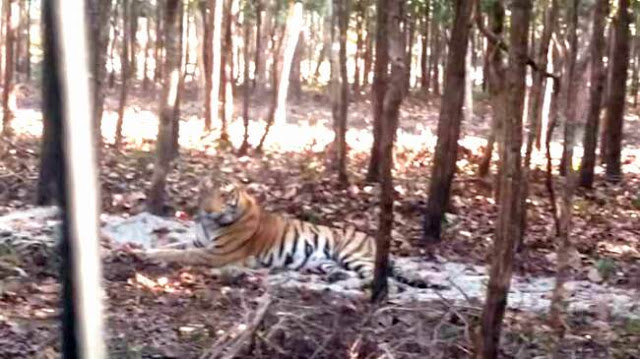