Pakyong must pay their gratitude to Mr Tara Tamang who is exclusive personality of Pakyong.
This 38 years nobel man , a driver by profession is unlike any other main line taxi driver.
His peculiarity is that he starts off his service very early in the morning around 3 AM to 4 AM enabling people from all walks of life to reach Siliguri by 8 AM.
Hailing from Pacheykhani , he wakes up around 2 AM he said, he cooks fodder for his cattle and set off for his regular duty of Pakyong - Siliguri Taxi service, he has been doing it past 14 years.

He says he likes his duty, he is boss of himself and he need not be servant of anyone, he also gets paid for extra by newspaper house shipment monthly for shipping local papers bundles in Siliguri town in morning.
This young man isnt among onlookers , he just does'nt wants to waste a time, so he says time is money and harder we work earnestly we get our deeds paid off honestly.

His father Mr Laxman Tamang who is a govt servant works at Melli Checkpost in Motor Vehicle Divison, his mother is housewife.
Interesting thing is that , he has left no stones unturned educating his two brothers and one sister.

His bother brothers are engineers, in civil and another electrical & electronic. His sister is persuing PhD in Sociology from North Bengal University at Siliguri.

He further says that while he brought second hand vehicle , Savari in 2004 with support from mother (father disagreed buying him vehicle) also locality people questioned him in criticising tone, they even called him nut. People didn't stop even brainwashing his mother that his son is simple wasting money.

But giving a damn to their thought he slowly and steadily picked up a pace with dignity and labour, today same people are started speaking on my back seeing my achievement. But I still give a damn care to those bystanders, he adds.

From Siliguri he picks his passengers at 11 AM again and returns home. Once reached home he again feeds his cattle fodder , cleanses cattle shed. After milching his cow he goes to bed after food. Yet again at 2 AM when everyone are dead asleep he starts off his duty...

And yes, everyones in Pakyong and even children know him, test it yourself ask who is 'Tara Driver' everyone will answer.

The Pakyong salutes such inspiring personality who has been making remarkable milestone kicking off all odds and impossibilities with great audacity & positive spirit, showing a great zeal of dignity and hardship now stands tall and respected by everyones.

We wish him more success ahead and hope his frontiers bestow his lucks. 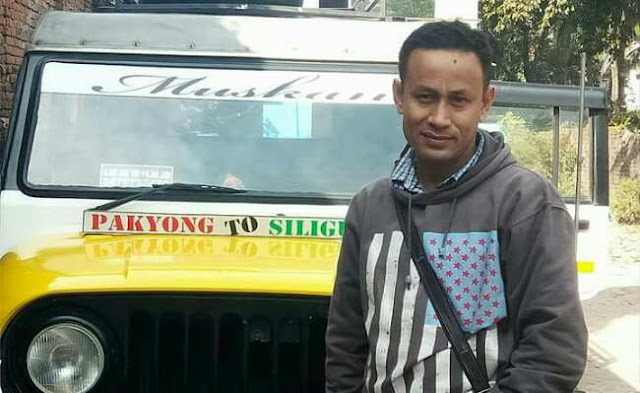