North Bengal will be getting another new district -Kalimpong, the 21st one in the state, following ceremonial declaration of chief minister Mamata Banerjee today.

With the new Kalimpong district,which will be carved out of Darjeeling, a total of eight districts will be coming under the umbrella of north Bengal.

Following rapid administrative reforms in North Bengal, creating new districts and divisions during the Trinamul Congress regime, a section of people in this region have started demanding a separate Siliguri district, comprising some parts of other adjoining districts.

It may be noted that present chief minister, Miss Banerjee, after coming to power, executed the proposed Alipurduar district, bifurcating Jalpaiguri, in north Bengal. Recently, under her leadership the state government has created a new Malda division, comprising three districts - Malda, North and South Dinajpur from Jalpaiguri division (which comprised seven districts of North Bengal) and another big district - Murshidabad in South Bengal.

According to administrative officials,Darjeeling, Kalimpong, Jalpaiguri, Alipurduar and Cooch Behar administration will be functioning under Jalpaiguri Division.

Kalimpong was a subdivision of Darjeeling district occupying almost one third area of the whole Darjeeling.

Historically Kalimpong was a part of Bhutan till 1864 and it was annexed to the British Empire in 1865 following Anglo-Bhutanese War in 1864 and the subsequent Treaty of Sinchula in 1865. Initially it was under the Western District but a year later Kalimpong was transferred to Darjeeling district, officials said.

Though a group of political parties in the Hills were demanding a separate Gorkhaland state comprising three Hill sub-divisions and part of Terai and the Dooars from the plains,a faction of Gorkha National Liberation Front (GNLF), constituted a new party named Gorkhaland Rajya Nirman Morcha,under the leadership of Dawa Pakrin, and demanded a separate Kalimpong district in 2011.

However, the ruling party in the Hills, Gorkha Jan Mukti Morcha (GJMM), during its agitation of inclusion of additional lands from the Terai and the Dooars region,had demanded administrative reforms to create new districts and blocks in the Hills.

Notably, the GJMM president Mr Bimal Gurung, during a public meeting, had claimed 'Kalimpong can't be a separate district because it is still a part of Bhutan', sources said. 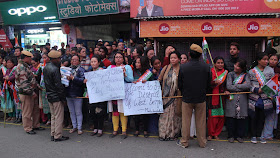 According to Darjeeling district magistrate MrAnurag Srivastava, Kalimpong will start its functioning in existing subdivision area having three blocks, one municipality and three police stations. Kalimping district magistrate office would start functioning from the existing SDO office,district judge court from existing court premises and the office from additional superintendent office will run from the superintendent's office.

Several plots of lands have been earmarked for the construction of required government offices later.

Kalimpong, a hill station, is located at an average elevation of 1,250 meters (4,101 ft). It has an area of 1,056 sq km and is surrounded by Sikkim, Darjeeling, Kurseong, Jalpaiguri and Bhutan. Kalimpong town, the district headquarters, is situated between Delo Hills about 5,591 ft and Durpin Hill (4,501 ft).

The original settlers of Kalimpong are the Lepchas although the majority of the populace are Gorkhas. Indigenous ethnic groups include the Newars,Bhutias, Sherpas,Limbus,Rais,Magars, Chettris, Bahuns, Thakuris, Gurungs, Tamangs,Yolmos, Bhujels, Sunuwars, Sarkis, Damais and the Kamis. The other non-native communities are the Bengalis, Marwaris,Anglo-Indian, Chinese, Biharis and Tibetans.

Besides a separate district, the chief minister has constituted 15 separate development boards including Lepcha Development Board for the people belonging to different communities in Darjeeling Hills.