Thousands of people from across the hills joined the Trinamul Congress yesterday even as chief minister Mamata Banerjee said a strategy was being worked out to promote the new district of Kalimpong as a tourism hotspot.

Trinamul claimed that the new entrants numbered around 5,000 and were from different communities and walks of life, including transporters, traders, students and lawyers.

PWD minister Arup Biswas welcomed the new entrants by handing them party flags at the Mela Ground in Kalimpong. They were called to the dais to receive the Trinamul flags community and job-wise.

"Mamata Banerjee is the only one who can bring about development...Give us one chance in the election, we will do in two years what others could not do in 20 years," Biswas told the gathering.

Biswas, who is also Trinamul's minder for the hills, without naming the Gorkha Janmukti Morcha, dared the hill party to reveal the development work carried out by the GTA in the past five years, instead of indulging in empty talks. "They have done nothing...Tell us what you have done. You are in the GTA and in the municipalities. Why people have to run to Mamata (for development)?" he said.

Binny Sharma, the spokesman for Trinamul (hills), said this was only the beginning and more and more people would be joining the ruling party in the coming weeks. "We will be mobilising more people from every corner of Darjeeling and Kalimpong. The days of the Morcha are numbered as it has failed to deliver on all fronts. People are for development," he said.

The chief minister, who chaired an administrative meeting of the new district, said Kalimpong would be developed as a tourist destination. "There are many places (of tourism interest) from Sillery to Mongpong. We will give all of them importance and develop them... We will work out a tourism strategy," she said.

Mamata listed a number of government properties that were being refurbished to make them attractive to tourists. Plans, she added, are also afoot to shift the jail from its present location in the heart of the town and construct a mall - just like the one in Darjeeling - in its place.

Mamata said Lava-Lolaygaon would be upgraded to a block and tourism facilities developed. Lava and Lolaygaon are now gram panchayats under Algarah block. The other two blocks in the district are Kalimpong I and Gorubathan. 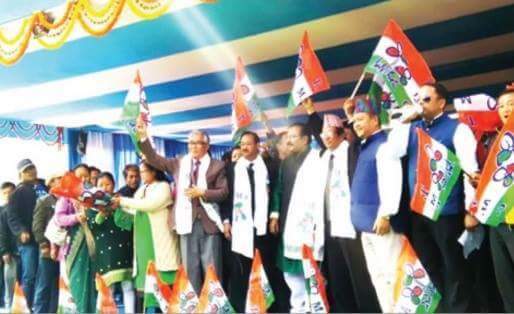