The BSF yesterday seized fake Rs 2,000 notes with a face value of Rs 2 lakh from near the Bangladesh border in Bengal's Malda, the biggest such haul since demonetisation putting a question mark on the Centre's claim that the new notes are hard to copy.

R.P.S. Jaswal, BSF DIG (South Bengal), said the seized notes appeared to have been "printed" as opposed to the "scanned copies" found in earlier hauls.

Sources said 10 of the 17 security features in the new Rs 2,000 notes had been imitated, including the watermark and the Ashoka Pillar, in the counterfeit currency.

Scrapping the old Rs 500 and Rs 1,000 notes - or 86 per cent of the currency then in circulation - on November 8 last year, Prime Minister Narendra Modi had said one of the aims was to crack down on counterfeit currency that was being used to fund terror attacks.

Reserve Bank of India deputy governor S.S. Mundra later said the newly issued Rs 2,000 and Rs 500 notes had increased security features and were hard to copy. "The fake notes available now are photocopies and can be easily identified," he said.

Yesterday's seizures came a day after the National Investigation Agency# arrested Umar Faruk, a suspect in another fake currency case, from Malda a few days back with three fake Rs 2,000 notes.

Faruk told the investigators a consignment from Bangladesh was on its way through Malda's Churiantpur area in the early hours yesterday. BSF jawans saw a man from the Bangladesh side throw a packet over the fence. They challenged him but the smuggler fled under the cover of darkness into a mango orchard, a BSF statement said. A hundred Rs 2,000 notes were found in the packet.

"We have sent the fake notes for a forensic analysis. Earlier, some new notes were seized but they were just scanned copies and of inferior quality. We suspect the involvement of organised gangs. These fake notes seem to have been printed in Pakistan and there was an attempt to smuggle them through the porous Bangladesh border," said a senior BSF official.

The NIA is likely to take over the fake-note probe. 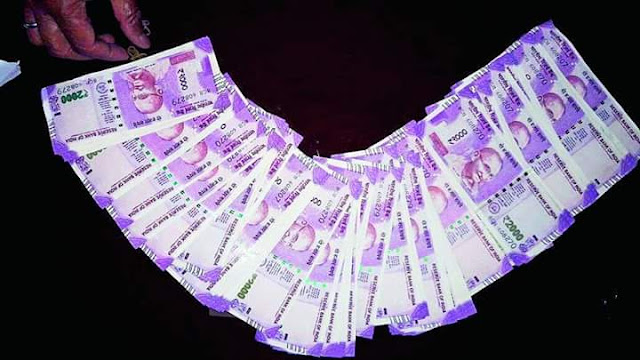 Mr. Rubben Visser. said…
I'm really inspired together with your writing skills and also with the layout for your weblog. Thanks for sharing this blog here. money cleaning chemicals for sale online
18 May 2021 at 23:18