Five shops were gutted in a fire that broke out close to Bhabaniganj, (Coochbehar) the oldest market in town, last night.

No one was injured in the blaze at Haripal Chowpathy, barely 100m from Bhabaniganj market area.

Six fire engines were pressed into service and the blaze was put out after around three hours.

Three fire tenders from town and three others from Dinhata and Tufanganj doused the flames.

"We could control the blaze after three hours. The fire was probably caused by an electrical short circuit," said a fire brigade source.

Of the affected shops, three sold stationery and two others were bicycle stores.

Jagannath Pal, the owner of one of the stationery shop, said the fire was first spotted in his shop. "Although it was late, the area was busy and yesterday being Saraswati Puja, there were lot of people out on the streets who saw the fire. I and some others have lost everything," Pal said.

Cooch Behar municipality chairperson Reba Kundu who visited the area, along with some of the councillors, last night said: "Five shops have been completely destroyed. I feared that the flames would spread to other shops and that is why I came to see when the fire fighters arrived at the spot. We will try and see what we can do to rehabilitate the affected shopowners."

In November 2003, most of Bhabaniganj market area had been gutted in a blaze and over 500 shops were completely destroyed. 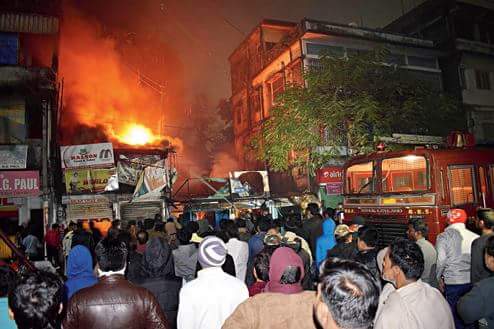