Mamata Banerjee's decision to form a new district has brought cheers for Kalimpong residents but also triggered the demand for a separate Siliguri district.

The chorus from the plains is an indication that similar demands may rise from other parts of the state also.

As the chief minister arrived in Bagdogra airport this afternoon and headed for Kalimpong where she will formally announce the formation of the new Kalimpong district tomorrow, representatives of an apolitical organisation demanded that the Siliguri subdivision and contiguous areas of Jalpaiguri district be put together and a separate Siliguri district be formed.

In Kalimpong town and suburbs, people were in joyous mood. Cries of "Mamata Banerjee zindabad" and "Kalimpongzilla zindabad" cut through the winter air as Mamata's convoy rolled up the hills along NH10 and headed for Kalimpong.

People offered her " khada" (the traditional silk scarf) at different locations along the route from the periphery of the town to Deolo hill, where she will be staying for the next three days.

"I am here to thank the chief minister for setting up the Kalimpong district. The district will benefit the common residents of Kalimpong," said Sunil Thapa, a businessman, who had stood along the Main Road as Mamata's motorcade passed through the town's main thoroughfare around 5.45pm.

In the plains, however, the demand for separate Siliguri district was articulated by a section of citizens as well as the BJP.

"We welcome the chief minister's decision to declare Kalimpong as a new district. At the same time, we would like to appeal to her to consider our demand also and create a separate district of Siliguri," Sunil Sarkar, the president of the Brihattar Siliguri Nagarik Mancha that was formed around five years back, said at a news conference here today.

They have also sought an appointment with the chief minister during her ongoing trip to north Bengal.

The Mancha members pointed out that as per the 2011 census, the total population of Siliguri and its surrounding areas, which comprise four Assembly constituencies (Siliguri, Matigara-Naxalbari, Phansidewa and Dabgram-Fulbari), is around 15 lakh. On the other hand, the population of the new Kalimpong district is around three lakh.

"But the irony is that even today, people from these areas need to travel to Darjeeling (80km away) or Jalpaiguri (40km away). If Kalimpong can be made a separate district for better administrative control and people's convenience, the same logic applies for Siliguri," said Sarkar.

This evening, even the local leader of the BJP raised the same demand.

The decision to form the Kalimpong district has evoked mixed reactions from retired bureaucrats and economists.

"It is good to have smaller districts or administrative units for better governance and law and order control. People's inconvenience in terms of travel to the district headquarters from far-flung places can be reduced considerably if such districts are formed," a retired state government official in Siliguri said.

He, however, pointed out that such smaller districts posed problems also. "Creation of a district means enhancement of administrative infrastructure, judiciary, putting more senior officials in newer posts and other ancillary works. Altogether, it is an additional burden on the government. Also, presence of smaller districts makes the task of planning difficult at the state level," he added.

Political observers said it would be interesting to see what the state does to address the demands for new districts.

"In the hills, the state formed development board for the Lepcha community first. But in due course, 14 new boards have been formed or announced later. Formation of these boards would surely give political dividend to Trinamul in the hills," an observer said.

"The state has also met the demand for separate Kalimpong district. It would be interesting to see what stand the state takes now on the demand for the separate Siliguri district and in case similar demands crop up in other parts of the state."

Representatives of the Darjeeling-Terai-Dooars Adivasi Bikas Sangathan, an association of non-Gorkha tribals residing in the hills, met Mamata at Bagdogra this afternoon and sought a development board for them.

"We have met the chief minister and sought a separate development board. In total, around 1.5 lakh non-Gorkha tribals reside in the hills," Gulsan Chickbaraik, president of the association, said.

Spread across approximately 11,000sqkm, Kalimpong is the largest subdivision in Darjeeling district. The Kalimpong subdivision will be upgraded to the new district. 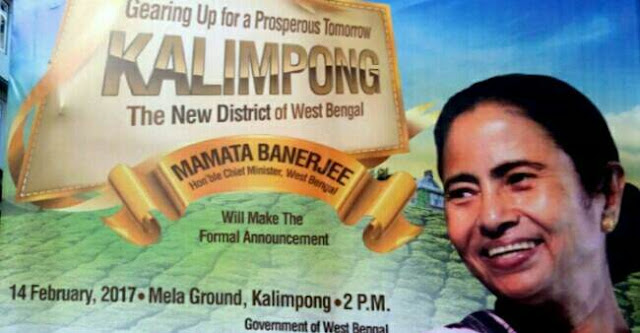