While most of the kids of her age must be busy with their winter vacations and Valentine’s Day, Akanksha Gurung is setting her arrows to hit the bull’s eye.

Akanksha, a 15 years old girl from Rose Bank Darjeeling, has been selected to compete for the 38th Junior National Archery Championship, which is to be held at Satara in Maharashtra between 20th and 25th February 2017.

Born to Mrs. Purnima and Mr. Nripendra Gurung, Akanksha is currently a student of Loreto Convent and has already bagged a number of trophies and medals in the sport that remains very less explored.

For a girl of her age, to have won 12 medals and 2 trophies in archery itself is a huge achievement.

Akanksha made her mark visible in the National frame by winning the gold medal in the competition held at Cooch Behar on 7th February 2017 and thereby becoming the top archer of her category in North Bengal.

Akanksha has been into archery from a very young age of 11 and has been able to stay in top form through constant hard work under the guidance of her coach Shri. Karma Lepcha at the Himalayan Archery Association.

We are very much inspired by the achievements of Akanksha Gurung and wish her good luck for her coming championship matches. We are also thankful to Shri. Karma Lepcha for introducing and promoting such sports which are very less explored and where our youths can excel.

GOOD LUCK AKANKSHA and KARMA sir... we look forward to reporting more of your successes. 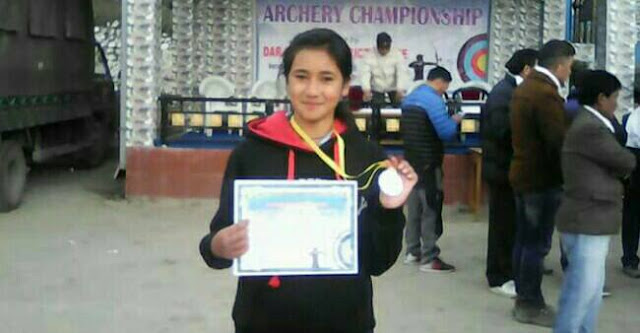