The mighty Kanchenjunga, all snow clad, stares at you from a distance. As you drive by the driver points out, “That is Kurseong and beyond that it’s Darjeeling. It’s some 150kms away,” he informs.

Winter all ends there as the chill is all at a distance. Mid-afternoon, in a T’Shirt, maybe you will prefer to search a shade rather than stand under the ‘winter sun.’ It’s yet to arrive.

The confidence, nevertheless, has long arrived at the Indian Camp, especially after a convincing display against Nepal in the semi-final. The mood stays perfect with India having won all the previous three editions. The fourth beckons.

Bangladesh, celebrating their first entry intoa a SAFF Women’s Championship final, had held India to a goalless draw in the Group League match. Even as connoisseurs maintain Bangladesh were defensive, it was all “part of a strategy” which worked perfectly for the neighbours.

At the media interaction, Bangladesh Head Coach Golam Robbani Choton smiles. “Every match is different. You have to play different Teams in a different manner. We will give our 100 percent and play to win. The strategy will be mine,” he asserted.

Indian Head Coach Sajid Dar insists having “learnt a few lessons” from the last match. “The last time we played Bangladesh the match ended in a goalless draw. We learnt quite few lessons from that and have tried to rectify them. We can’t afford a repeat,” he states. “In the league stage, they were more defensive. Tomorrow is a final match, they may or may not change their strategy. We are ready for everything.”

“We had our chances but couldn’t capitalise. We can’t afford that luxury in the final.”

Choton also maintained that Bangladesh had their chances too. “Yeah, India may have had more ball possession. But had Sabina Khatun been able to capitalise on the chance in the 75th minute, we should have won. Tomorrow, we will stick to our strategy,” Choton opines.

Sajid did admit that “on the surface India seem to be the favourites.”

“But we have huge respect for Bangladesh. They have made it to the final and it wasn’t presented to them on a platter. They have earned it,” he quipped.

Indian Captain Bala Devi adds: “Bangladesh were the Group champions ahead of us. We rate them highly and are taking our opponents very seriously.”

However, Bala wasn’t much willing to read much into her Captain’s role. “In a Football match the role of the Captain is limited. Maybe, it’s just leading the team into the ground and doing the toss. After that, it’s a team effort,” she told www.the-aiff.com.

Sajid, meanwhile, complimented Bala for her leadership “off the field.”

“Bala is the captain not only on the field but also off it. That’s the reason she is our captain. As a player I rate her very highly. She is one of the all-time best players of India,” Sajid commented.

Post the morning recovery session at the SSB Camp ground, the Siliguri Frontier (SSB) band, as a gesture sings for the girls. “Tomorrow is an important match,” someone from the Band speaks. “We will be there to support you,” he mentions before breaking into the lyrics.

The Golden girls join in, clap and sing in chorus, it’s their favourite song after all. ‘CHAK DE INDIA.’ 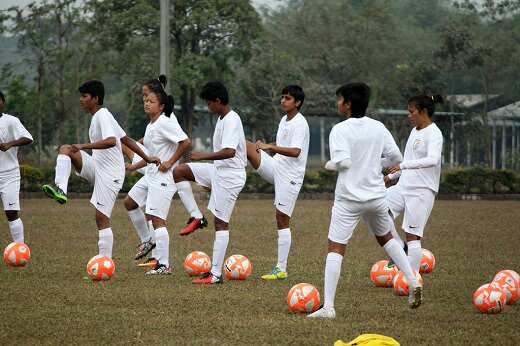