An infuriated mob in Ausgram in Burdwan district of West Bengal set ablaze a police station and vandalised several police vehicles on Saturday. The mob even allegedly attacked police and officers were seen running helter skelter, some of them were seen sobbing inside the police station.

The mob had been protesting against the encroachment of government land attached to the local Ausgram High School since Friday. The agitators armed with bamboo and wooden sticks were seen vandalising and damaging police vehicles and setting the police station on fire.

The Superintendent of Police, Burdwan district, Kunal Agarwal said, “We have identified the trouble mongers and we will soon arrest them. This kind of behaviour will not be entertained. Meanwhile, we have also ordered an enquiry into the illegal construction on that piece of land.”

Trouble began on Friday when locals comprising villagers and students of the school started protesting against the construction of concrete pillars by a civic police volunteer on the government land.

The president of the managing committee of the school, Chandranath Banerjee had also submitted a complaint to the Ausgram Block Development Officer against the illegal encroachment.

However, on Friday, the area turned into a war zone when the inspector-in-charge of the Ausgram Police Station, Imtiaz Khan allegedly hit Banerjee and he started bleeding profusely. As many as 200 students, villagers and tribal groups armed with bows and arrows clashed with the police. Several people on both the sides were injured. 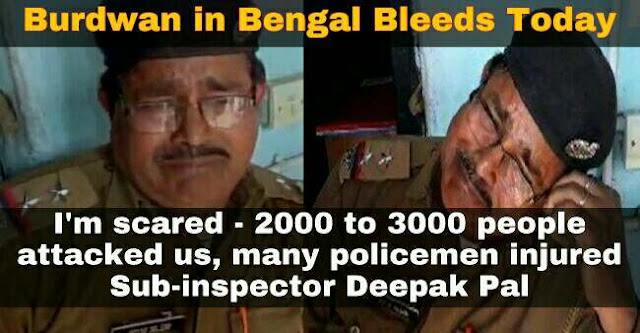