The Indian desert camel which has been declared an endangered species by the International Union for Conservation of Nature and Natural Resources (IUCN) owing to illegal slaughter and smuggling. Recently, 61 camels were caught by the police at Kishanganj, Bihar. The animals had been transported from Rajasthan, which is approximately 1400 km’s from Kishanganj and were being transported to Bangladesh. Kishanganj is a border district and is a meagre 35 km’s from Bangladesh.

As the trading of camels is banned by the state of Rajasthan, a case was registered in Kishanganj Police Station vide FIR no. 543/2016 and the animals were seized. The animals have been placed in Khagra Mela Ground, Kishanganj and the government has requested animal welfare NGO’s to take custody of the animals and ensure their feed and survival.

Stepping up for the rights of the suffering animals, Mrs. Nitasha Jaini, who is a painter by profession, Ms Anjali Anand, Operations Manager with an Education Agency and Ms Neeru Gupta, an education professional, have camped in Kishanganj leaving their daily lives, families and jobs to take on the legal battle for custody of the animals and ensure their survival. The braveheart women backed by animal welfare NGO, Dhyan Foundation have been making repeated efforts to transport the animals back to their natural habitat.

On December 5, 2016, the women and NGO fought the case in court and got release orders of 61 Camels to rehabilitate them at a shelter in Rajasthan (their natural habitat). However, on December 14, 2016 a stay was put on the release order. The stay was put without cross checking with the activists, preventing the camels from being taken back to safety. The next court hearing is on January 5, 2017.

“This is a question of 61 lives of which only 60 remain now. One animal has already suffered to death in the delay caused to the stay on the order to shift the animals back to their natural habitat. Bihar does not provide the living conditions conducive for camels and neither is their feed and fodder available. We are extremely shocked at the decision, as camels are not allowed outside Rajasthan in the first place, then why put a stay?” exclaimed Jaini.

The Camel has been declared as Rajasthan’s State animal and The Rajasthan Assembly bans the slaughter, trading and unauthorized transportation of camels. The Rajasthan Camel (Prohibition of Slaughter and Regulation of Temporary Migration or Export) ACT, 2015 also makes causing injury to camel punishable. Camel slaughter is punishable for up to five years with monetary fine.

Permission is required from a senior government official for the inter-state transport of animals and a certificate from a qualified Veterinary doctor is required, certifying the animals as fit to travel. The camels in question had been transported beyond Rajasthan’s state boundaries without the necessary documents. With no documents and no permission it is extremely strange how 61 camels could have been transported for 1400 km’s across states without a single check? 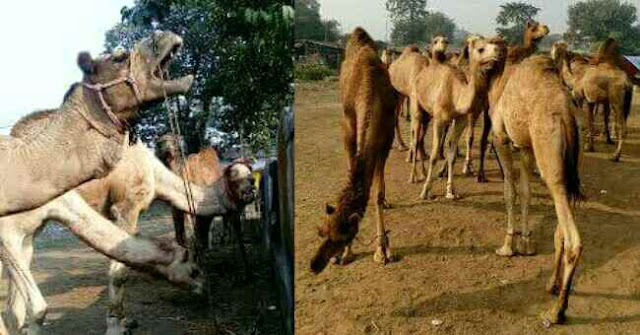