A man who said he was armed with a grenade hijacked a Libyan plane which landed on Malta Friday with 118 people on board, Malta's prime minister and government sources on the Mediterranean island said.

After more than an hour on the tarmac, the plane's door opened and a first group of women and children were seen descending a mobile staircase.

"First group of passengers, consisting of women and children, being released now," Prime Minister Joseph Muscat said on Twitter, adding in a later tweet that 50 passengers in all were being let off the plane.

The Airbus A320 had been on a domestic Libyan route operated by Afriqiyah Airways from Sabha in southern Libya to the capital Tripoli but was re-routed.

"The Afriqiyah flight from Sabha to Tripoli has been diverted and has landed in Malta. Security services coordinating operations," Muscat said on his official Twitter account.

"It has been established that Afriqiyah flight has 111 passengers on board: 82 males, 28 females, 1 infant," he said. There are also seven crew members.

The plane could be seen on the tarmac surrounded by military vehicles and all flights in and out of the airport were initially either delayed or diverted to destinations in Italy.

There were conflicting reports about the number of hijackers.

Maltese government sources told AFP that there was a single hijacker on board who had told the crew that he had a grenade and would release the passengers only if his as yet unspecified demands were met.

A source from Libya's unity government spoke of "hijackers" on board.

"Negotiations are under way to guarantee the security of all the passengers," the source said, without specifying who was negotiating.

An Afriqiyah Airways source said two hijackers had threatened the pilots with an explosive device, probably a grenade.

Malta International Airport tweeted that there had been "an unlawful interference" but that operations had now resumed.

Flights from Brussels, London and Paris had been due to land at the airport on Friday and were delayed.

The flight from Paris has since been able to land, according to the airport's online arrivals board.

All outgoing flights were shown as delayed.

Libya has been in a state of chaos since the 2011 overthrow of Moamer Kadhafi left warring militias battling for control of different parts of the country.

Forces loyal to a fledgling national unity government recently took control of the coastal city of Sirte, which had been a bastion for the Islamic State group since June 2015.

Western powers have pinned their hopes of containing jihadism in the energy-rich North African state on the government but it has failed to establish its authority over all of the country.

A rival authority rules the country's far east, backed by the forces under military strongman Marshal Khalifa Haftar who have been battling jihadists in second city Benghazi.

Only local airlines -- banned from European airspace -- operate in Libya, with flights to Tunis, Cairo, Amman, Istanbul and Khartoum. 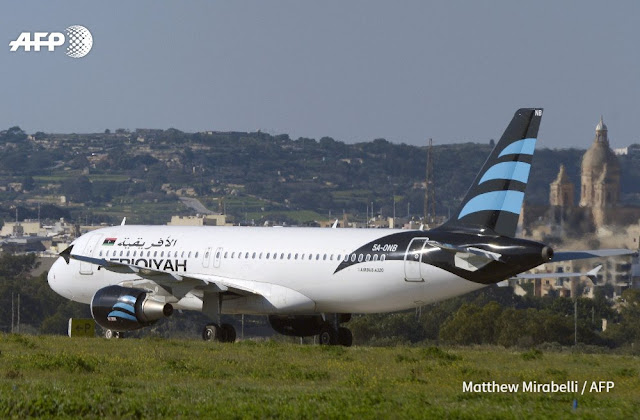