The state forest department cannot pay members of hula party, a squad that is deployed to chase away elephants due to cash crunch, thereby increasing the risk to the lives of many in Bengal.

The importance of elephant chasers can be gauged from a simple piece of statistic -- Bengal tops the states in the country in terms of man-animal conflict. Every fourth Indian who is killed in animal attack, is from West Bengal.

Every year a number of people are killed by elephant and tiger attacks in Bengal. In the year 2015-16, elephants killed as many as 108 people. Elephants not only kill people, but also destroy houses and crops every year.

Worse, elephants tend to stray more into human habitations during the winter months.

While tiger attacks are restricted to villages in the Sunderbans, marauding herds of elephants roam around a far wider area -- in the districts of West Midnapore, Purulia, Bankura in south Bengal and Jalpaiguri, Alipurduar and Cooch Behar in the north.

“Demonetisation has paralysed the entire economy. We have not been able to pay Hula party members who are at the centre of our strategy to drive away elephants. Now, who will be responsible when elephants kill villagers?” asked forest minister Binay Krishna Barman.

With existing members not getting payment, new members are declining to join the squad.

Hula parties were set up quite some years ago. They are equipped with drum, torch and fire crackers. When elephants stray into villages, the Hula party and forest department staff plays an active role to drive away elephants.

There are nearly 20-25 groups of Hula party across South Bengal. Each group consists of 25-30 people and they are paid Rs 224 per head for 8 hours duty. They are deployed 60 to 80 days in a year. Earlier, the range officer would pay cash. Payments were made a day after the elephant was driven back.

Sanjay Dutta, the ranger of Belacoba Range, Jalpaiguri, remarked, “For driving away elephants, we have to hire people. But we can’t do that right now because of the cash crunch.”

In an administrative meeting in Jhargram in June, chief minister Mamata Banerjee expressed concern at the frequent crossing of elephant herds from the Dolma hills of Jharkhand.

The chief minister instructed forest department officials to ensure that humans do not fall prey to elephant herds. Rebuking her officials, Mamata asked them to value human lives. “If I don’t see any improved results, I will shut down the department,” the chief minister said. 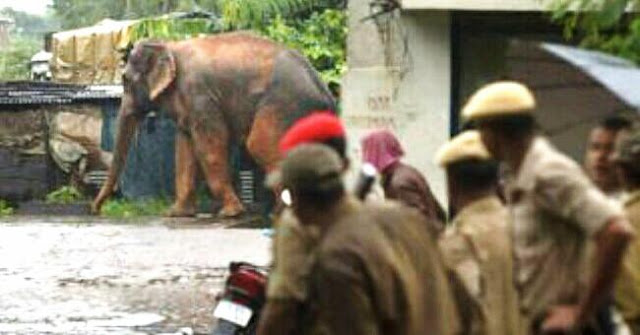