The father of a youth arrested by the police has allegedly committed suicide, prompting family members and neighbours to allege that continuous police harassment had forced him to end his life.

The body of Sujit Rai, 45, was found hanging from a tree in Kurbi tea garden near Kurseong this morning. A team from Kurseong police station that had arrived to seize the body for post-mortem was gheraoed by around 150 people for about three hours.

Sujit's son and two other youths had been arrested by the Kurseong police on Monday in connection with the murder of a 15-year-old school girl. Her body was found in a crevice in a stream on Saturday, a month after she had gone missing.

Sujit's younger brother, said: "In a case related to the murder of a girl, police were harassing my brother and used to call him often for interrogation. He used to fear the police and this prompted him to commit suicide."

Sujit was a chowkidar in Kurbi tea garden and his body was found around 7am. When the police arrived around 10am to take away the body for post-mortem, they were gheraoed by the local people. It was around 1pm when the police left with the body after pacifying the crowd.

"We believe police harassment forced Sujit to commit suicide. We have demanded that police or civil administration provide compensation to the family. While we demand that the accused involved in the murder of the 15-year-old student be arrested, we also want the police to stop harassing local people," said Yogendra Rai, a GTA Sabha member and Gorkha Janmukti Morcha leader.

L. Divya, the subdivisional police officer, Kurseong, denied the harassment charge. "There was no harassment. All of it was (calling people for interrogation) part of investigation."

K. Amarnath, additional superintendent of police, Darjeeling, said 20 people had been called for interrogation so far in connection with the girl's murder. The ASP said post-mortem report revealed that the girl had been strangled to death.

Asked about the compensation, Amarnath said: "A memorandum has been submitted for compensation with a request that it be taken up with the higher authorities."

Sources said a forensic test would also be conducted as the body had been recovered after almost a month.

Yesterday, the three youths, who had been arrested for their suspected involvement in the murder, were produced in the additional chief judicial magistrate's court in Kurseong and remanded in judicial custody for 14 days. 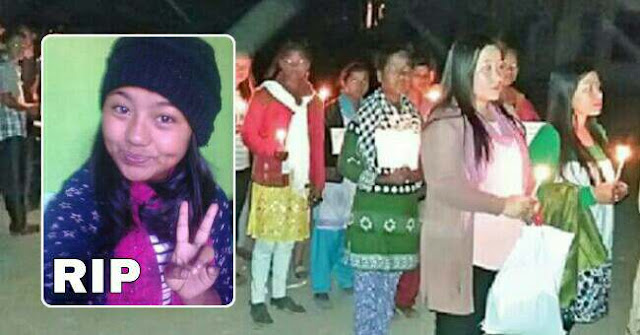