THE ASSAM REGIMENT COMPLETES 75 YEARS OF SERVICE TO THE NATION

It was a moment of great pride and honour for the serving personnel and verterans of the Assam Regiment, who had gathered at the Governor House Lawns in Shillong today to commemorate the  75th year of the Raising of The Assam Regiment. It was at this very location that the Assam Regiment was raised in Shillong on 15 Jun 1941 by Lt Col Ross Howman. Sir Robert Reid, the then Governor of Assam  had stated,“You are the living symbol of Assam’s martial ardour, the embodiment of her physical strength and I have no doubt your steadfastness your bravery, your skills and your endurance will surpass all”. The Regiment was primarily raised to quell the enemy aggression and defend crucial parts of Eastern borders of India.

Addressing the serving and the veterans, the Governor of Meghalaya, Shri V Shanmuganathan, lauded their services and said that the Assam Regiment had truly lived upto the expectations of the people of the Northeast and the founding fathers of the Regiment. He appreciated the vast talent of the robust yet friendly people of the region and their performance in military operations at national as well as international levels. He also unveiled the commemoration plaque and released a book on the history of the Assam Regiment titled The Indomitable Rhino Warriors of India’s Northeast in the presence of the Colonel of the Assam Regiment and Arunachal Scouts, Lt Gen Subrata Saha.  The book has been authored by Lt Gen JR Mukherjee and Col Mani K Gahatraj (both retired officers).

Earlier in the day, Gen Dalbir Singh,  the Chief of the Army Staff (COAS), presented 'Colours' to the four young Battalions of the Assam Regiment namely, 16 & 17 ASSAM and 1 & 2 ARUNACHAL SCOUTS at an impressive parade led by Brig Sudhir Kumar Jha, Commandant of the Assam Regimental Centre. GOC-in-C Eastern Command Lt Gen Praveen Bakshi, Colonel of the Assam Regiment and Arunachal Scouts Lt Gen Subrata Saha, and other serving dignitaries and veterans were also present at the ceremony. The Army Chief also dedicated the renovated War Memorial to the Regiment. This war memorial had been inagurated on 24 Nov 1953 by Shri Bishnuram Medhi, then Chief Minister of Assam. 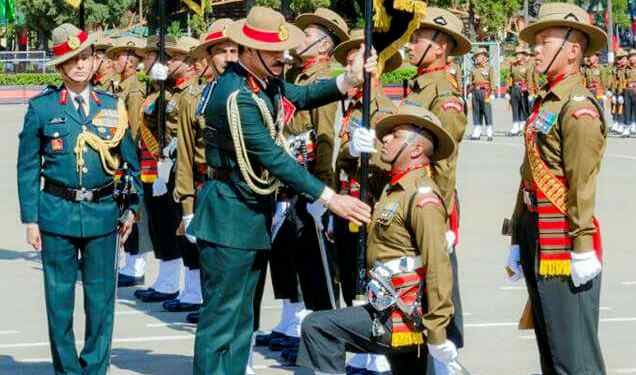