Workers of at least two gardens in the Dooars blocked roads in Jalpaiguri and labourers of an estate in Alipurduar gheraoed the manager demanding wages yesterday.

Around 850 workers of Karala Valley Tea Estate, on the outskirts of Jalpaiguri, and their families blocked NH31D at Assam More this morning.

They had gheraoed the garden manager in his office demanding immediate payment of wages around 7.30am. Later, they walked to the highway and blocked it.

The protest that started around 9.30am continued till 3.30pm and was lifted after administrative officials assured the agitators of intervention.

Workers of Batabari garden blocked the Chulsa-Lataguri road for about 10 minutes with the same demand.

In Alipurduar, workers of Mujnai Tea Estate demonstrated in front of the garden manager for around four hours demanding wages.

Following the demonitisation drive, an arrangement had been worked out to facilitate wage payment in the estates.

But on November 21, the Reserve Bank of India said a new process would be introduced leading to further delay in wage disbursal.

We have made an assessment of the situation:

Since November 9, planters have not been able to withdraw enough money to pay the workers because of the ceiling imposed on withdrawal. As wages are paid in cash, most estates have missed payment dates.

"There are gardens where wages of two fortnights would fall due in a day or two," said a planter in Siliguri.

Workers who got their last payment at the end of October or in the first week of this month are living on food grains provided by the state under the National Food Security Scheme and vegetables like cha ful (tea flower) and kochu (wild taro).

"We got wages on October 29. Most of us don't have any cash left. We are having rice and wheat given by the state with fried tea flowers or a curry of kochu," Sukri Kishan, a Karala Valley worker, said.

"We are working everyday but not getting wages," said worker Kalainti Baraik.

Labourers said local shopkeepers and those in the rural markets had stopped giving them items on credit. "They allowed credit once or twice in the past 10-15 days but now, even they are cash-strapped," said a worker.

"If such situation persists, many families will have to struggle to manage even one square meal," Rekha Oraon, another worker said.

After the demonitisation announcement, it was decided that tea planters could deposit money in the district administration's account. The district magistarte, who can withdraw cash above the ceiling, could then hand over the money to planters for wage payment.

But on November 21, the Reserve Bank of India asked planters to contact their banks with details of the workforce and the banks were asked to let planters withdraw cash.

It had been stated that a garden could withdraw a maximum of Rs 3,500 per hectare of plantation for a fortnight.

The new directive gave rise to confusion as the administration had to give back the planters' deposits from the DMs' accounts. Second, availability of cash in banks was a problem. Trade unions objected to the new process saying it would deprive many labourers.

"If workers of some gardens get wages, labourers in other estates might start agitating," Sanjay Bagchi, the secretary of the Terai Branch of Indian Tea Association, said.

The process of sending back money to planters' accounts has started.

"It has been also mentioned by the RBI that payment of wages can be made for two fortnights. After that bank accounts should be opened for each worker," an official said. "Unless wages are paid, it is tough to approach the workers, who are already disgruntled, and ask them to provide documents to open bank accounts." 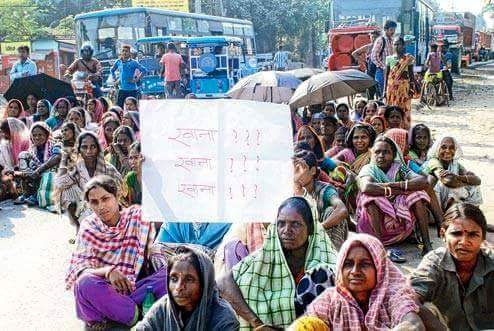