Sikkim enterprise slapped with IT notice after depositing Rs 4.5 lakh in 3 days

The Income Tax Department on Friday sent a notice to an enterprise in Sikkim after they deposited Rs 4.5 lakh in cash in mere 3 days. The enterprise has been told to give an explanation in the matter.

In the notice sent to the Sitaram Enterprise in Sikkim, the IT department claimed that since the announcement of demonetisation of Rs 500 and Rs 1000 notes by Prime Minister Narendra Modi, Sitaram Enterprise had deposited Rs 4.5 lakh in cash from November 12 to November 14. The enterprise has been told to give an explanation till 25th November.

The said enterprise has been told to approach the Siliguri Income Tax Department with the explanation for why there was a sudden cash surge in the deposits.

If the enterprise is accused of income tax avoidance, there will be a penalty of 200% of the rate of the income tax.

Prime Minister Narendra Modi announced on 8th November that the Rs 500 and Rs 1000 note will cease to be legal tender. In place of the old notes, new Rs 2000 notes and Rs 500 notes have been introduced. 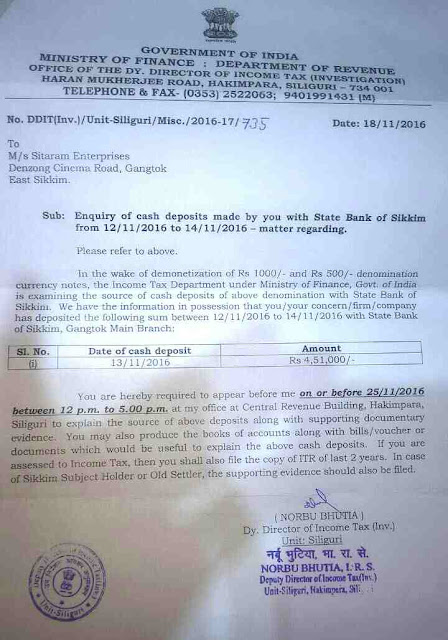