President Obama recently welcomed to The White House 6-year-old Alex, the young boy who had offered his home to Syrian child Omran Daqneesh.

Remember the little American boy who offered his home to Syrian child Omran Daqneesh, whose photograph in a bloodied state had gone viral? That young humanitarian, Alex, was recently a guest at The White House.

Upon meeting six-year-old Alex and his family, President Obama couldn't stop gushing about his big heart and how proud that made him.
"You being so nice, and kind, hopefully makes other people think the same way. So I was very proud of you," Obama told Alex. "I ended up reading it [the letter] to everybody. Everybody heard what you said."OMRAN WILL BE OUR BROTHER"

Alex had written the letter to President Obama a few months back after seeing the viral picture of five-year-old Omran covered in dust and blood post an airstrike on his home in Syria. Alex, in his shaky handwriting, had asked Obama to bring Omran to his home.
Read more:  6-year-old American boy seeks Obama's help to bring Omran Daqneesh from Syria

"We will give him a family and he will be our brother", read his letter, which Obama read aloud at the United Nations Summit on Refugees.
"In my school, I have a friend from Syria, Omar, and I will introduce him to Omran," Alex's letter went on. "We can all play together.

We can invite him to birthday parties and he will teach us another language. We can teach him English too, just like my friend Aoto from Japan." 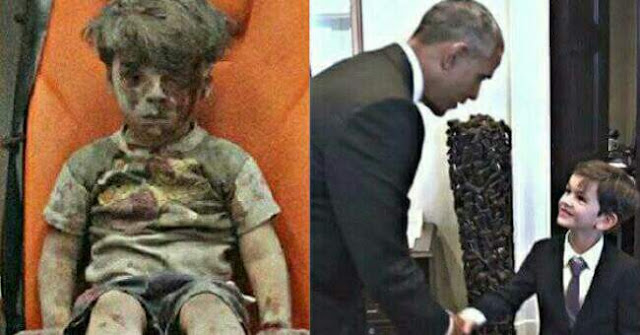