The forest department has deployed a drone in Buxa Tiger Reserve for better protection by keeping a close watch on inaccessible areas and looking for possible movement of poachers and to mitigate man-animal conflicts.

Ujjal Ghosh, the field director of the BTR, yesterday said the drone or quadcopter was being used for the first time in a north Bengal forest and second time in the entire state after the Sundarbans.

"The drone can fly at a height of 100m and cover a radius of 500m from a point in the air. We started using the drone in the BTR a few days back for aerial surveillance of inaccessible areas, particularly certain portions of rivers, hilly terrains and some grasslands, to track the movements of animals like elephant and gaur. At the same time, if anybody enters the core areas of the forest, like armed poachers and timber smugglers, the drone will spot them and send pictures. Once a hunter or smuggler is spotted, the nearest forest office can be intimated immediately and they can be intercepted," said Ghosh.

According to the forester, the drone would come in handy for avoiding man-animal conflicts.

"If a wild elephant approaches a forest village, we will come to know about it. Accordingly, we can take precautions and avert man-animal fights. The drone can be of help during animal census also. More importantly, if any wild animal is in distress, we can track it easily. The drone would help us in animal rescue," he said.

"We are operating the drone in Buxa as it was useful in Sundarban National park. Buxa is the second forest in Bengal where a drone is in operation."

The drone has been acquired at a cost of Rs 2 lakh. "Its main drawback is low duration of the battery. After a flight of 25 minutes, the drone's battery needs to be recharged. We control the flying devise with a cellphone through an Android application," said Ghosh. 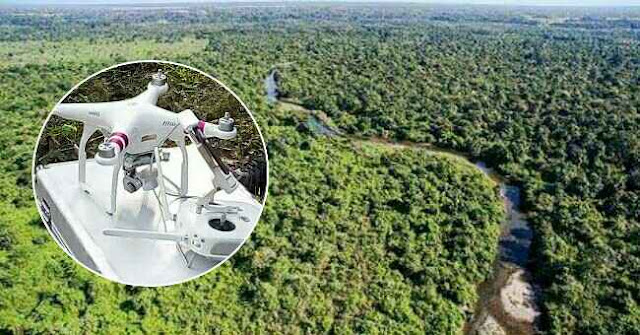