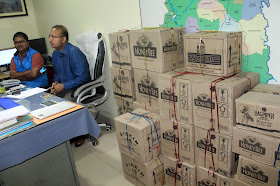 Acting on a tip off, Kalimpong Police seized at least 65 cartons of Sikkim made liquor from a Tata Sumo vehicle at fifth mile here on Saturday night. Police recovered another 25 cartons from the same accused from his godown.

The liquors were being illegally transported from Sikkim and were supposed to be brought to Kalimpong Hat Bazar.Upon noticing the police, the owner of the illegal liquor Mohan Prasad and the driver escaped from the scene taking advantage of the darkness. Police, however, apprehended Prasad from his godown at Hat Bazaar with an additional 25 cartons of Sikkim made liquor.

Speaking with media persons, Kalimpong additional superintendant of police (ASP) Amlan Ghosh said:“In two raids that involve the same accused, a total of 90 cartons of different brands of Sikkim made liquor have been seized along with the vehicle.The owner has been arrested while police is in search of the driver. The market price of the seized illegal liquor is around 1.42 lakhs.” Mohan Prasad has been booked under the Bengal Excise Act and was produced before the Kalimpong ACJM Court from where he was forwarded to 14 days of judicial remand.